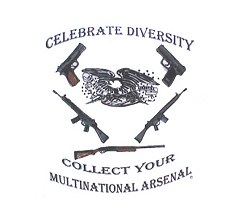 The histrionic insanity the many anti-2nd Amendment zealots have quite often reaches the point of punishing kids for simply liking a picture of what turns out is not an actual gun:

“Ohio middle schooler Zachary Bowlin learned a valuable lesson about privacy last week after he “liked” a picture of an airsoft gun on Instagram.

“The seventh-grader ‘liked’ a picture of an airsoft gun on Instagram last Thursday that contained the caption ‘Ready.’ Bowlin said he plays with airsoft guns with his friends, and didn’t think much of clicking on the post.

“When he returned to Edgewood Middle School the next day, it was obvious officials had been tracking his online activities.

“‘I liked it, scrolling down Instagram at night about 7, 8 o’clock, I liked it,’ Bowlin said. ‘The next morning they called me down (to the office) patted me down and checked for weapons and told me I was getting expelled or suspended or whatever.’

“Bowlin was also served with a 10-day suspension for ‘liking a post on social media that indicated potential school violence.'”

But it turns out that the rabid Left are quite willing to forgive far, far worse:

“U.S. Immigration and Customs Enforcement (ICE) is lambasting Montgomery County after jailers knowingly released an 19-year-old undocumented immigrant accused of bringing an AR-15 assault-style rifle onto school property, despite an immigration detainer lodged against the teen.

“On Saturday, April 29, Mario Granados-Alvarado, 19, a citizen of El Salvador, allegedly broke into a Rockville police car, snagging a shotgun, AR-15 rifle and ammunition from the vehicle’s trunk. The unmarked Chevy Impala was parked outside of an off-duty officer’s house at the time of the overnight break-in.”

The difference? The evil perpetrator who must be punished was an American kid who liked what isn’t even a real gun; the innocent youth was an adult who brought a rifle to campus.

Clearly, “some… are more equal than others”.