The Vanguard That Rocks The Cradle

…is the vanguard that rules the world, amirite?

The Gramscian “March through the Institutions” has, at its forefront—nay, it’s vanguard—the educational establishment, which for well over a century has been twisted by tyranny and mutation until it makes anything the Soviet Union came up with seem downright “reactionary”.

“Yvette Felarca, a social studies teacher at Martin Luther King Jr. Middle School, attended a protest against Yiannopoulos’ scheduled speech at the University of California Berkeley Wednesday, when she spoke out against the Breitbart senior editor’s controversial views and called on protesters to prevent him from speaking ‘by any means necessary.’

“[She] then issued marching orders to dozens of other radical leftists who converged on campus to shut down Yainnopoulos’ free speech tour ‘by any means necessary.'”

But this is just a teacher teaching about civic activism, right?

This person who has given the power and privilege of teaching our children has turned the “teachers apple” into something far, far more evil. 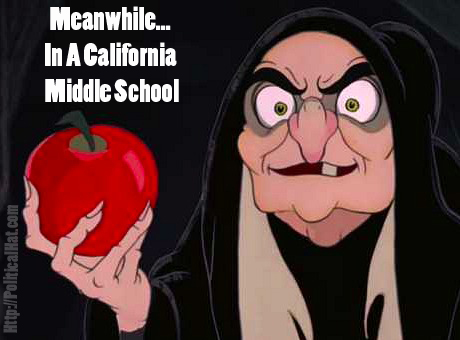 BAMN (By Any Means Necissary) are violent extremists who have for decades sought to silence any and all dissent.

These are people who make the Red Guard seem like pacifists.

Yes, this is reminiscent of Weimer Germany, where the NAZIs gained popularity because they were the only ones willing to stand up against the outright Communists… even before the “beefsteak” Straßerites were purged in the “Night of the Long Knives”.

This abominable woman has been a rather public figure who has been openly mocked for her knee-jerk violent adherence to a Stalin-eque denouncement of “fascists” in the most stereotypical hard-Left possible.

And, of course, the problem is according to the authorities is… parents who have a problem with this so-called teacher. Can’t stop that vanguard, amirite?

Remind me again who it is that has power and privilege???

One Response to The Vanguard That Rocks The Cradle