The Entire Point of Microaggressions is Self-Censorship

When one can commit a “microaggresssion,” even though nothing negative was intended and despite the “offense” is not objectively offensive, it is up to the allegedly aggrieved to determine if the “microaggression” occurred or not.  This gives the “microagressed” upon power over the alleged “microagressor”.  That this privilege is afforded to the axiomatically defined oppressed/morally superior classes of individuals vis-à-vis the axiomatically defined oppressor/morally inferior classes, has become so typical as to not even be ironic, just underlines the Huxleyian hypocrisy seen on college campuses today.  Case in point:

“Students in at least one Rutgers University residence hall are being encouraged to use only language that is ‘helpful’ and ‘necessary’ to avoid committing microaggressions.

“The display, photos of which were obtained by Campus Reform, is titled ‘Language Matters: Think,’ and was placed in the College Avenue Apartments by a resident assistant, according to a current resident of the building who does not wish to be identified.” 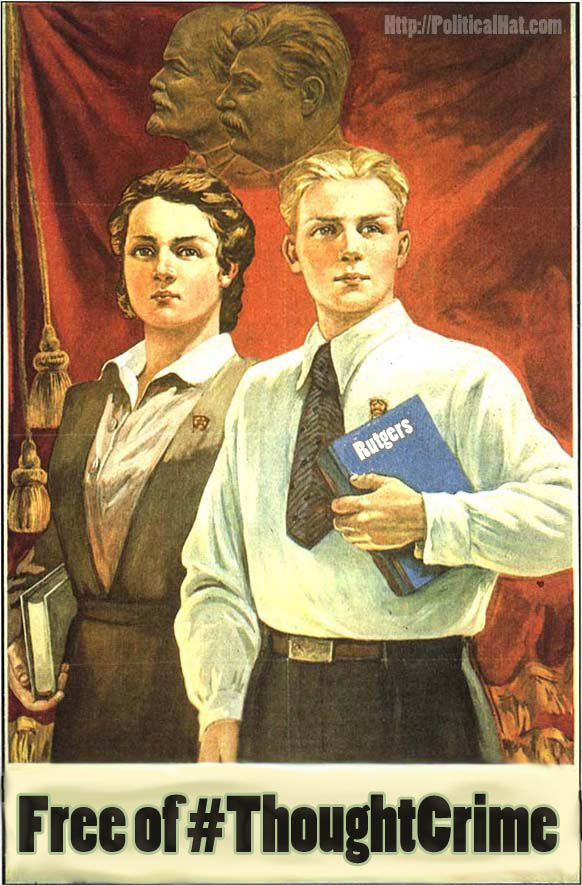 It isn’t just words, deeds, or actions that are deemed “microagressions”, but even the lack thereof!

“The ‘Language Matters’ website includes a presentation similar in nature to the flyer, outlining the ‘big impact’ of ‘little things’ and providing examples of the three types of microaggressions.

“A microassault may include ‘avoiding someone,’ for instance, while an example of a microinsult is telling someone they are strong for a girl. A microinvalidation, meanwhile, could involve asking an Asian or Latino person where they are from.”

Thus, the only way to avoid committing a dreaded “microagression” is to not only shut-up with your own thoughts or even motile will, but to proactively say, act, and otherwise exist in a manner and form dictated to you as doubleplusgood.