One of the axioms of the Left is that America was created by “White racists” (a redundant term for the Left), and that this “regime” must be overthrown.  Apparently the types of White people who exist in this “regime” can only range from “White Supremacist” to “White Traitor” and “White Abolitionist”, the later of which involves “[c]hanging institutions, dismantling whiteness, and not allowing whiteness to reassert itself.” 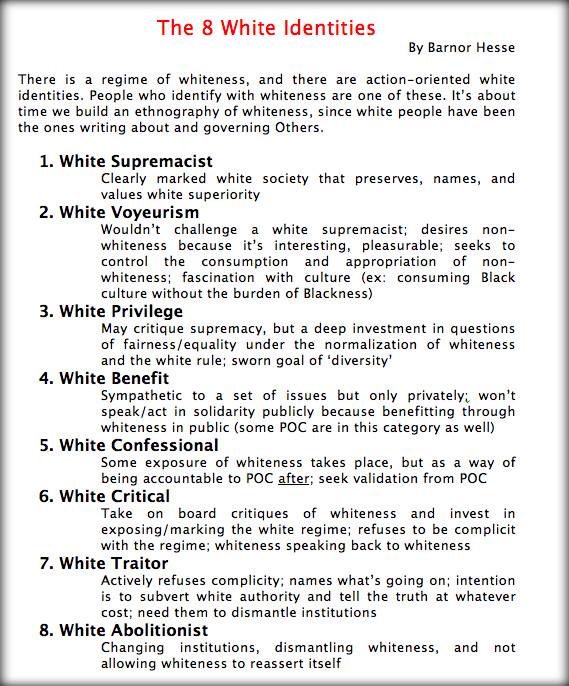 This is the standard manichean view of the Left: You are either on the side of the “oppressor”, or you are dedicated to smashing said “oppressor”.

Even “White Supremacist” as they describe it is nothing more than someone who values Western Civilization and that civic heritage that is the basis for America, regardless of race, rather than someone who believes that non-Whites are genetically inferior to the “Aryan” race.

But this is the what Progressive thought boils down to: White people can either admit their own original sin of “Whiteness” and destroy this “Whiteness” and thereby oneself, or be an evil oppressor who will be destroyed. Either which way, four legs non-Whites good; two legs Whites bad.

This entry was posted in Education, Progressives and tagged Kyriarchy, Social Justice. Bookmark the permalink.

3 Responses to The 8 White Identities