People seriously signing a fake petition to require mandatory euthanasia for the elderly was both sad and frightening.  That doctors in “right to die” states are starting to push such ends is beyond terrifying:

“Mary Beerworth, executive director of Vermont Right to Life, shared the story  of a 91-year-old woman who was staying in a rehab facility because she broke her wrist. When her family was not in the room, Beerworth said rehab staff repeatedly asked the elderly woman if she was in pain or depressed; then they would remind her that she could commit doctor-prescribed suicide under the new law. Beerworth said the woman never was diagnosed with a terminal illness; she just was old and had a broken bone.” 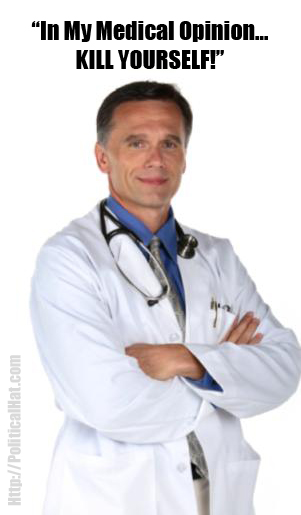 Those who have to rely on Medicare and Medicaid are most vulnerable to the belt-tightening of fat-cat bureaucrats, and under a Canadian style healthcare system, the bottom line beats out the right to live:

“There also is an economic incentive to push people toward assisted suicide… [Oregon’s] Medicaid program for the poor used to send letters to members, denying coverage for their expensive medical treatment and offering to cover their assisted suicide instead… The drugs typically used for assisted suicides are not expensive”.

And for those who are unable to speak for themselves, or are manipulated by “loved ones”, the future is bleak:

“Euthanasia advocates will claim that there are safeguards, but these so-called safeguards are easily circumvented… For example, the legislation requires that two witnesses be present when a person requests assisted suicide; but these witnesses can be an heir and a friend of the heir or an abusive caregiver…

“The legislation also requires that the patient self-administer the lethal suicide drugs, but it does not require that a doctor or any other professional be there when the person takes them. So, there really is no way of knowing if the person is taking the deadly drugs of their own free will…

“‘The doctor prescribes lethal dose and never sees you again,’ … ‘The doctor is not there when you die. There is no oversight.'”

This entry was posted in Healthcare, Progressives and tagged DOOM, Leviathan, Obamacare, RIP. Bookmark the permalink.

3 Responses to The Hot New Medical Advice: KILL YOURSELF