The Hegemonic Dynamics of Children Swimming

When left to their own devices, boys will tend to play with boys and girls will tend to play with girls.  This startling bit of obviousness was stumbled upon by University of Southern California graduate student Michela Musto, as seen by her paper “Athletes in the Pool, Girls and Boys on Deck: The Contextual Construction of Gender in Coed Youth Swimming”. 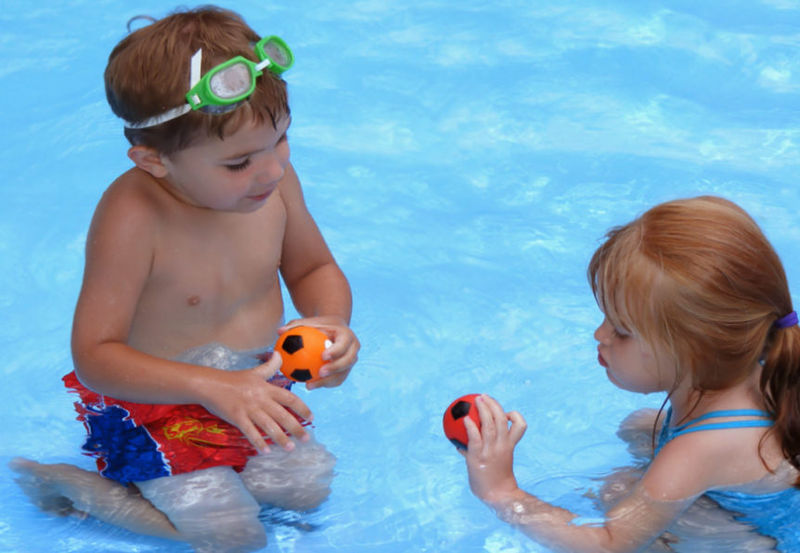 As is typical with “social studies” academic papers, the author starts with a presumption and then shoehorns in the results to validate it, no matter how much reality is ready to bite her in the proverbial butt.

It is important to note that this “research” wasn’t funded, and was basically the author hanging around children’s swim groups and “hanging out” with the kids…

“Few studies have examined how groups of individuals enact different patterns of gender relations within and across contexts. In this article, I draw upon nine months of fieldwork and 15 semistructured interviews conducted with eight- to 10-year-old swimmers on a co-ed youth swim team. During focused aspects of swim practice, gender was less salient and structural mechanisms encouraged athletes to interact in ways that illuminated girls’ and boys’ similar athletic abilities, undermining categorical, essentialist, and hierarchical gender beliefs pertaining to athleticism. However, in the swimmers’ unfocused free time, the salience of gender was high and structural mechanisms encouraged swimmers to engage in ‘borderwork.’ In this context, similarities between the genders were obscured and girls and boys instead interacted in ways that affirmed essentialist and categorical—but nonhierarchical—meanings of gender. By paying attention to structural mechanisms and the variable salience of gender, we can thus see the various conditions under which children deploy different patterns of gender relations, and how less oppressive gender relations can potentially ‘spill over’ from one context to the next.”

As is usual of these papers, there is a strong feelz over realz element, which in this paper takes the form of a story-like introduction with passages such as: “Girls and boys as young as five years old rummage through their swim bags, grabbing goggles and swim caps as they walk toward the starting blocks. Between races, swimmers slather their arms with waterproof sunblock, laugh with their friends, and offer each other bites of half-eaten bagels.”

This little narrative is only interrupted when the author realizes that her entire pre-conceives narrative has been contradicted:

“Throughout their conversation, Alex, Kevin, and Andrew draw upon multiple and contradictory meanings of gender. Although they agree that it ‘sucks’ to be the ‘only male’ in an ‘all girls’ event, the boys then discuss Sophia’s athleticism in a relatively unremarkable manner. Instead of teasing Alex for being slower than a girl, Andrew nonchalantly informs Alex that Sophia is ‘really fast,’ something neither Alex nor Kevin contests. How was it possible for gender to simultaneously be of minimal and significant interest to the swimmers?”

This little truth is an obvious truth that most Americans came to long, long ago.

But the author is at a crisis: How to square with ideology that circle of reality?  Easy:

“Because gender is a social structure that is embedded within individual, interactional, and institutional relations, social change toward gender equality is uneven across the gender order”

So, rather than take the reality she witnessed at face value, she twists this into proof that boys and girls are somehow not different and that society can be properly re- combobulated!

“To answer these questions, I outline the ‘gender geography’ of swimmers’ gender relations within two main contexts, arguing that when gender was less salient and children could ‘see’ athletic similarity between the genders, children interacted in ways that undermined hegemonic beliefs about gender. Yet when the salience of gender was high and structural mechanisms encouraged kids to engage in borderwork, swimmers affirmed beliefs in essentialist and categorical—but nonhierarchical—differences between the genders.”

This is not a contradiction, or even a dichotomy.  When differences between the sexes are not relevant, the kids don’t see it as relevant; when differences between the sexes are relevant, such as socially, the kids just instinctually notice the difference and are fine with boys playing with boys and girls with girls.  “Hierarchical” systems have nothing to do with it.  Clearly the author is incapable of thinking in terms other than a manichean view of hierarchical differences vs. undifferentiated equality.

And, of course, there has to be intersectionalism, with class and race being scrutinized… because the author seems to not think that kids see each other as kids and not hegemonic racial oppressors or the oppressed…

And, of course, the author views her own existence as a “white, middle-class woman influenced the themes that developed throughout this project”.  Her position as an elitist Leftist nitwit probably had a greater effect on the study:

“I may have been desensitized to some of the class-based aspects of the swimmers’ day-to-day experiences and the colorblindness present within their racial ideologies […]. It is also possible that the Asian and Latina/o swimmers may not have felt comfortable openly discussing racial issues with a white researcher.”

The dichotomy that the author alleges stems from organized practice where the boys and girls were required to practice together, which is contrasted to what the children do in their free time.  A table in the paper sums up her findings: 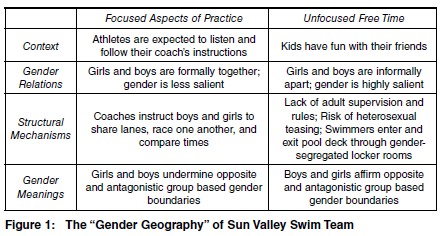 Since the study included 8 to 10 year old children who haven’t (assumedly) hit puberty where increasing differences physically between the sexes manifest, the study of how the boys and girls interact in an athletic environment is of minimal usefulness for the broader question of the “social construction” of “gender”.  Such logic seem to be beyond the author who attributes the lack of relevancy of the children’s biological sex (or “gender” if you prefer) to the swimmers having “interacted in ways that allowed them to associate alternative meanings with gender”, while waxing poetic about a boy losing to a girl in a swimming contest didn’t turn into a violent misogynist over it.  The lack of perception of difference in the abilities between the girls and boys is attributed to anything other than the fact that there are pre-pubescent kids, where the dominance of males over females in most athletic endeavors is not evident as it is with men and women who’ve already dealt with the transition of puberty.

In contrast, when allowed to associate as they wanted, the boys preferred hanging out with the boys and the girls with the girls.  The author goes on to state three reasons for this.  The first is that it was the lack of policies that minimized differences that led to the gender binary being strengthened by lack of forced Social Justice.  The second reason is that the pool helped create this division by having separate locker rooms for the boys and the girls… Yes, the author is saddened as the lack of naked pre-pubescent boys and naked pre-pubescent girls having to share cramped space in a locker room.  The third reason is that because some of the kids had “crushes” on kids of the other “gender” (i.e. biological sex) this limited interaction with each other.

Did these kids’ parents even know this woman was “hanging out” with their kids?

In effect, the author blames boys and girls not being the same, boys having crushes with girls who have crushed on guys, and the lack of artificially changing this natural dynamic.

The natural way of things is oppression to the author.

The vast majority of males know they are males as opposed to females, and are attracted to females; the vas majority of females know they are females as opposed to males, and are attracted to males.  Once puberty hits, this becomes the defining characteristic of human beings as a dimorphic species, and thus the center around which society evolved and is dependent on.

The author also warned of the impact of race and class, despite any differences in race or class actually having any impact on the kids, on the authors own “privileged” status as a “middle class White” woman.  Indeed, she blamed the kids not being budding little social justice warriors on the insidious influence of the White middle-class and its values!

The author was most despondent that the girls and boys recognized that there is such a thing as girls and boys, and that the two were not the same.  In time, assuredly, these kids will be properly indoctrinated before they hit Kindergarten.

After all this empirical findings, the author is mentally forced by her own indoctrination to declare her pre-determines views to be true, and that making pre-pubescent boy and girls practice swimming together (or otherwise is forced to “enact more equitable gender relations”) is proof that with enough direction, the eeevil hegemonic hierarchy of the gender binary can be defeated.

Academia is beyond hope.

The paper in question:

The Contextual Construction of Gender in Coed Youth Swimming

One Response to The Hegemonic Dynamics of Children Swimming