There are many historical flags associated with the United States, particularly during amongst which is the naval ensign used by Oliver Hazard Perry.

On September 10, 1813, Perry’s command fought a successful fleet action against a squadron of the Royal Navy in the Battle of Lake Erie. It was at the outset of this battle that Perry famously said, ‘If a victory is to be gained, I will gain it.; Initially, the exchange of gunfire favored the British. Perry’s flagship, the USS Lawrence, was so severely disabled in the encounter that the British commander, Robert Heriot Barclay, thought that Perry would surrender it, and sent a small boat to request that the American vessel pull down its flag. Faithful to the words of his battle flag, ‘DON’T GIVE UP THE SHIP’ (a paraphrase of the dying words of Captain James Lawrence, the ship’s namesake and Perry’s friend), Perry, with Lawrence’s chaplain and purser as the remaining able crew, personally fired the final salvo, and then had his men row him a half-mile (0.8 km) through heavy gunfire to transfer his command to USS Niagara. Once aboard, Perry dispatched Niagara’s commander, Captain Jesse Elliot, to bring the other schooners into closer action while he steered the Niagara toward the damaged British ships. Like Nelson’s Victory at Trafalgar, Niagara broke the opposing line. Perry’s force pounded Barclay’s ships until they could offer no effective resistance and surrendered. Although he had won the battle aboard Niagara, he received the British surrender on the deck of the recaptured Lawrence to allow the British to see the terrible price his men had paid. Perry’s battle report to General William Henry Harrison was famously brief: ‘We have met the enemy and they are ours; two ships, two brigs, one schooner and one sloop.’ 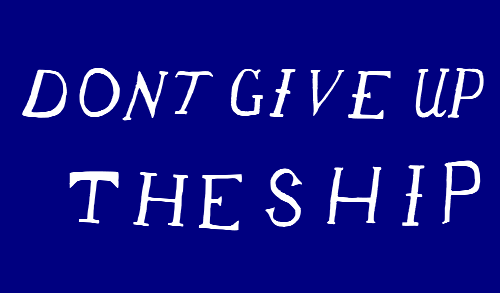