The focus this time: On and on, South of Heaven

The Left have dropped any pretense of civility.  But then why would they need to be civil when they are in control?

“You see characteristic leftist arrogance among global warmers, who show their respect for their opponents by refusing to listen to them and implying that they are crackpots. On campus, leftists have spit at conservatives, screamed obscenities at moderate liberals, yammered on about phony ‘rape crises’ while doing everything they could think of to promote universal debauchery, rigged local votes to silence opponents of the Kill Israel (aka ‘BDS’) movement.

“The list goes on, the arrogance is staggering, the asymmetry all too obvious. Conservatives, bursting with facts and ideas (and anger and dismay), are eager to have it out with liberals and maybe even convince a few. Liberals are eager to make assertions and strike moral poses, but not to respond to rational argument or speak to the facts.”

Why? Because to the Left, it is a matter of faith:

“Traditional religion used to be the iron grate that kept worldly beliefs from falling into the flames and turning into red-hot religious convictions in their own right. Among most conservatives it still is.

“But for modern liberals it is only natural to be upset, defensive, dogmatic, and immovable when you are challenged on your political views. Few of us are prepared to defend our deepest spiritual beliefs. Most of us rarely think about them. Many of us have never had reason to believe them; we simply believe what our parents did. That is perfectly fair and suitable—except when rational, worldly politics is forced to confront politics-as-religion head-to-head.”

“The American upper middle class is separating, slowly but surely, from the rest of society. This separation is most obvious in terms of income—where the top fifth have been prospering while the majority lags behind. But the separation is not just economic. Gaps are growing on a whole range of dimensions, including family structure, education, lifestyle, and geography. Indeed, these dimensions of advantage appear to be clustering more tightly together, each thereby amplifying the effect of the other.”

So, what leads to such downfall?

“In part, the problems are similar to what is found in so many nations facing economic challenges.

“‘First, government is growing faster than the private sector. The fact that government spending now consumes twice as much of the economy’s output today as it did back in 1988 means that politicians have been repeatedly (and vigorously!) violating my Golden Rule.

“‘Second, there’s too much government intervention. A nation that models any of its policies on Mussolini-style fascism obviously is making a big mistake since the net result is an economy burdened by corrupt cronyism (sadly, a common problem in Latin America).’

“But there’s another reason to be down on Brazil, and it is far more discouraging.

“‘Third, the social capital of the country has been eroded. Simply stated, there are too many people (as data from the 2014 election reveal) who view government as a vehicle for personal (and unearned) enrichment.’

“‘And when this third problem develops, it’s all but certain that a nation is doomed. After all, many nations have reversed bad fiscal policy. And many nations have reduced government intervention. But fixing the culture of a people is like putting toothpaste back in a tube.’

“Indeed, I’m going to augment my list of pithy adages. In addition to Mitchell’s Golden Rule and Mitchell’s Law, we not have Mitchell’s Theorem of Societal Collapse.” 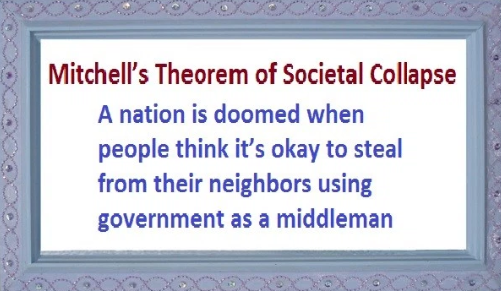 This entry was posted in Progressives and tagged DOOM, Economy, Leviathan, Quick Takes. Bookmark the permalink.