Ah, beautiful multi-culturalism where transsexuals and radical Islamists can link hands is unity against those eeevil defenders of Western Civilization… oh, wait…

“Three North African men attempted to stone two male to female transsexuals to death in Dortmund, according to local Police.

“The two victims were walking together in the early hours of Monday morning when they were approached by three North African men while walking down the Leopoldstrasse. The men attempted sexual advances, but upon realising the victims were transsexuals began attacking them.

“Elisa, 37, and Jasmin, 50, reported to police that the men initially hurled insults in Arabic toward them and spoke of their need to stone (to death) ‘such persons.’ Presseportal has published the police report which says the victims responded with insults which escalated the situation to violence. The trio of men then began to throw rocks at the victims.”

Because nothing secures fundamental human rights of the LGBTQ&c. crowd than importing people who come from countries are areas where LGBTQ&c. individuals are routinely executed:

“Lethal homophobia is widespread in the Arab world and Iran. A 2008 British Wikileaks dispatch noted that the Islamic Republic of Iran has executed “between 4,000 and 6,000 gays and lesbians” since the Islamic revolution in 1979.

“Islamic State has murdered dozens of gays by tossing the men off buildings. Saudi Arabia, Sudan, Yemen and Qatar, to name just some of the most anti-gay countries, persecute LGBTs with the death penalty and imprisonment.” 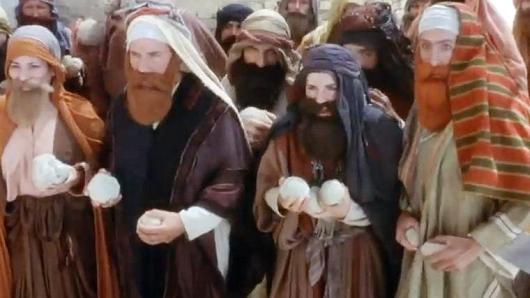 A well thought-out scheme there Europe…

This entry was posted in Progressives, War & Terror and tagged DOOM, Europe. Bookmark the permalink.

One Response to This Is What Multi-Cultural Diversity Looks Like