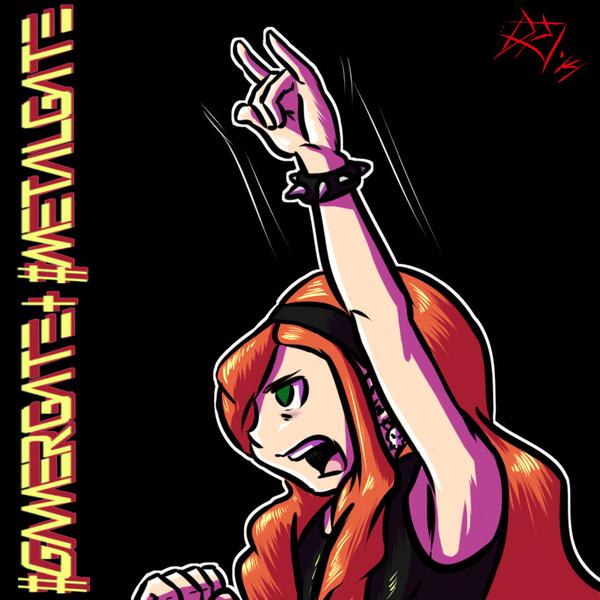 The same Cultural Marxist insanity behind #GamerGate have been increasingly, and laughingly, been trying to go after Heavy Metal.  Much as with #GamerGate, the Social Justice Warriors are increasingly outing themselves as being not part of the sub-culture, but external enemies that seek to only destroy.

“While aggression against women may have been overlooked or written off as a gimmick in the 1970s and ’80s, in 2015 metal’s derogatory lyrical content is only one of the problems that need to be addressed. Many bands either openly encourage violence against women or fail to support legitimate female fandom, but it certainly doesn’t end there. Female metal bands are rarely booked on national tours and practically ignored by the media — and worse, the ones who make it that far get ridiculed or sexualized.

“Go ahead, boys, dig your Slayer Vans in the sand, but if metal doesn’t change to reflect its more diverse audience, it could vanquish itself into irrelevancy. Do you really think excluding women will further metal as a sustainable art? No. Keep excluding women, and it will be a dead genre in 50 years — or an outdated, embarrassingly nostalgic subclass of musical racism and sexism.”

Ah yes, all those sexist bands like Mötley Crüe who sang about “Girls, Girls, Girls” not only had a plethora of female fans that traded make-up and hair tips with Mötley Crüe and other “hair metal” bands, we so “sexist” as to have let a girl… drum for them!  Doesn’t that just totes LITERALLY ooze MISOGYNY???

The author’s dismissal of BABYMETAL as “a band only a pedophile could love” seems a bit culturally insensitive to the idol-loving non-White Japanese.  Ironic when the author goes full intersectional feminist and whines about “systems”:

“And even if metal fans are principally male, why are they reluctant to cheer for a female-fronted band? Never fail to understand this: because being a fan is an act of submission. It’s the same reason men can’t wait destroy a successful female player in a live-action role-playing video game. Lower-ranked males despise the disruption in hierarchy represented by a successful female. They’re jealous, and don’t want to give up power.

“Or worse, they either fail to see the common humanity in a female or believe they’re just not worth hearing. The empathy gap in metal is so enormous that the problem is systemic. Until metal fans can appreciate metal for the music and not just who plays it, metal will remain the dark fraternity it is.”

This is but another example of a Social Justice Warrior refusing to even entertain the possibility that reality exists, and substituting their Cultural Marxist idiocy on people.

The poster child for why Metal is sooo misogynistic?  Cannibal Corpse.  A band that makes the musical equivalent of a horror movie.  A band that writes fiction about horror.  Apparently this is what misogyny looks like:

Just because a band sings about horrible things does not mean that they are promoting it.  Further evidence presented by the deluded author includes Alice Cooper concerts promoting rape and violence against women, when it’s just vaudville.

Such demonstrated ignorance of Metal and Headbangers everywhere can be seen by this “expert” being totally oblivious to the existence of any Metal band with females other than Halestorm, going to far as to derisively ask: “Can you name 20 metal acts with at least one female member? Ten? Even five? Didn’t think so.”

And as a bonus: Russkaja

And as another bonus: Spacegoat

Just… so… many… bands: Ice Age

This can’t go on forever, or this post will be beyond epic in length.  Last one: Phantom Blue

I could go on listing even more bands… or I can ignore idjits and enjoy the awesome music.

Update: Oh, what the heck, here’s another one: Warlock

This entry was posted in Progressives, Uncategorized and tagged Kyriarchy, Mood Music, Social Justice, War on Women. Bookmark the permalink.