A “liberated African-American woman” was ecstatic that her son “Bug” wanted to be a pretty pretty little princess for Halloween:

“I pictured Oct. 31: my handsome, sturdy brown-skinned son in a flowing wig and poofy dress, tiara sparkling atop his head. I saw us trick-or-treating in our New Jersey suburb, going from one colonial to the next, our neighbors asking ‘And what are you, uh, little girl?’ as they dropped candy in his bag after a curious glance at me.”

However, this Social-Justice-fest turned to horror!

“But when I browsed for costumes, I felt uneasy. In the princess section, long wigs were the color of spun gold. Even Snow White’s silky tresses glistened through the cellophane, the opposite texture of my son’s coarse hair. Whether it was Cinderella or her fairy godmother, each package showed a picture of a smiling white woman who glowed. ‘You, too, can be me,’ she beckoned, ‘for this one special day.’

I left the store in a panic. I didn’t care if my son wanted to be a princess. I just didn’t want him to want to be a white princess.” 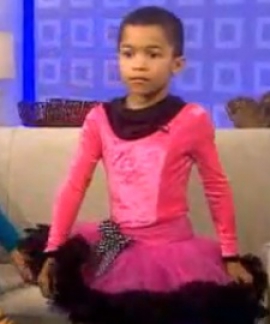 Why won't you love me Mommy!

The “Whiteness” was just too oppressive:

“I thought about how Bug’s preschool celebrated Black History Month, but the fairy-tale books lining the shelves featured white characters. Solomon’s therapists were white and female. We avoided television, but couldn’t miss the outdoor ads showcasing pale models you either wanted to kiss or emulate. Our suburb is diverse, but we happened to be the only black family on our block.

“So if it turns out Bug is gay, we’d embrace his identity. But if he wanted to be white, we’d have to have a talk.”

They love their children just as long as they are useful tools to fight for “Social Justice.”  For them, children are to “sculpted” into Gardens of Social Justice:

“Not so with their mothers. We plant seeds in our children, then sculpture beautiful gardens around them, believing they will flower into our creations. But our children peek beyond those bushes out into the world and decide for themselves who they will be.”

Also note, the lack of whining about “cultural appropriation”.  ‘Twould seem that no one wants to “appropriate” from those icky White princesses…

This entry was posted in Progressives and tagged FAIL, Kyriarchy, Social Justice, WTF. Bookmark the permalink.