UCLA Student Government Aghast at a Jew Joining Their Ranks

Is there any campus at the University of California without a student government that isn’t hell bent on a Judenfrei “safe space”?

The UCLA undergraduate student council, i.e. USAC, grilled a nominee to the judicial council because the nominee was Jewish, and thus must have shadowy and conspiratorial connections. 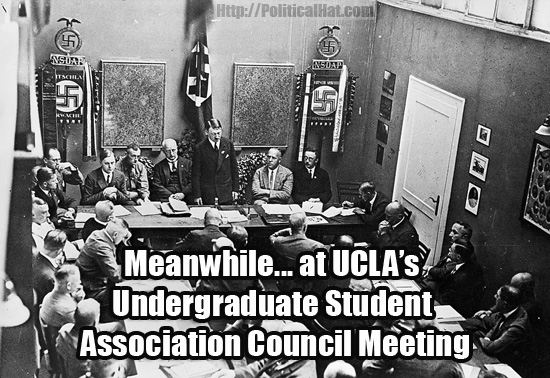 Though she was eventually approved, the attacks on from many of the “diverse” student council was too much even for UCLA’s Daily Bruin:

“Barring the dubious legality of not appointing someone based on his or her religious identity, the controversy over Beyda’s appointment makes little logical sense. The extent of Beyda’s involvement in Jewish community groups is irrelevant to her ability to execute her job on the Judicial Board. Suggesting otherwise implies that any person with any kind of community identity cannot make objective decisions on the board.

“If Beyda cannot make decisions about issues that affect her community, can a Muslim student in the Muslim Students Association or a black student in the Afrikan Student Union do so? A Latino student in MEChA?

“For a council seemingly obsessed with celebrating diversity in student positions and advocating against discrimination, the proceedings of Tuesday’s meeting were particularly hypocritical.

“Several councilmembers asserted that while Beyda was more than qualified for the role, they were uncomfortable appointing her to the position specifically because cases related to the Israeli-Palestinian conflict can come before the board, and they felt that Beyda would not be able to judge such cases fairly.”

There is little surprise at the hatred.  UCLA’s USAC has been controlled almost continuously by race (and more recently LGBTQ) obsessive maniacs who generally want to lead the vanguard against the genocide of cishet White people.

William A. Jacobson  over at Legal Insurrection has video: