An idjit from Britain, where real free speech does not exist, whines about how “hate speech” isn’t really free speech. 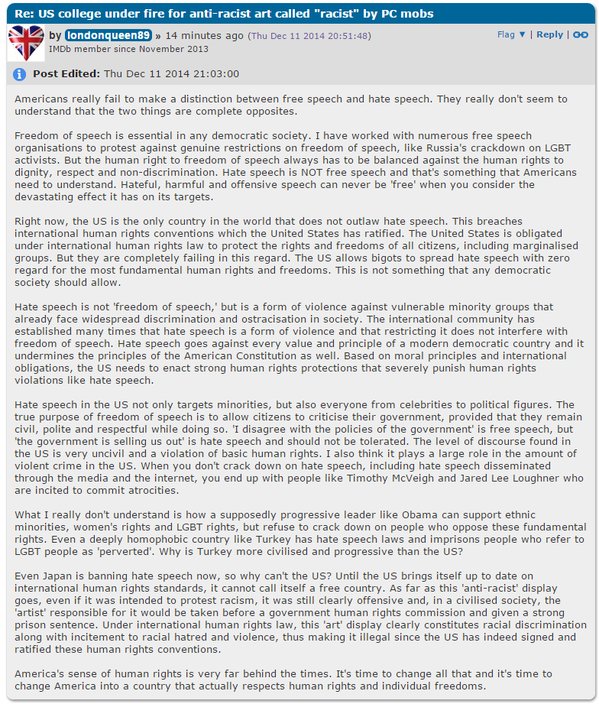 So-called “hate speech” is still free speech.  The so-called “rights” to “dignity” or “respect” would mandate that the state be used to force people to act, indirectly to eventually think, what the state finds acceptable.

“Hate speech,” then is simply speech that the state deems to be wrong.  By labeling it “hate speech” and declaring that it is not “free speech”… presumably because people are free to say what the state allows them to say.

Speech, furthermore, is not violence against vulnerable minority groups.”  Speech only crosses the line to violence when it is used as fighting words or an explicit incitement to violence.  In other words, there must be actual harm directly caused by the speech in question.

But individuals such as that Brit twit seem to believe that speech that might influence people to think incorrect thoughts ought to be banned by the state because the state deems that such incorrect thinking might led to violence.  By that measure, couldn’t we ban Marxist texts, the teaching of Critical Theory, or Justin Bieber?

The root of the misconstruction by this Brit twit is the idea that the “true purpose of freedom of speech is to allow citizens to criticise their government.”  Yet bans on “hate speech” have been used to do just that.

The purpose of freedom of speech isn’t criticism of the government or for “democracy.”  Free speech has no purpose at all.  It is the purpose of the state and democracy to defend out inalienable freedom of speech.  Limitations are, and ought to be, rare, and then only restricted amongst adults when it causes direct and measurable harm.

Anything else is not free speech.

Addendum: Michael Walsh, over at the PJ Tatler, points out a similar attack on free speech in the name of saving “free speech” by banning “hate speech” – which is defined by the Left for their own self-serving purpose. It is well worth reading, though it is suggested that you take any blood-pressure medication you may have beforehand.

This entry was posted in Progressives and tagged Europe. Bookmark the permalink.