The House and Senate: The Modern 1st & 2nd Estates

In pre-Revolutionary France, the central government of the King assumed all power.  This left the religious and secular nobility (the 1st and 2nd Estates), with prerogative and privilege, without the concomitant duty to serve.  As Alexis de Tocqueville noted of L’Ancien Régime:

“It had different prerogatives, was animated by a different spirit, played a different part, and inspired sentiments of quite another order. It must be remembered, too, that local governments had broken down and made way for a central administration staffed by a bureaucracy that was steadily undermining the power of the nobility.”

The reaction back then bears a stark resemblance to the House and the Senate today:

“And with the rising tide of popular feeling, the parliaments tended  more and more to a take a hand in politics while, as a result of the increasing efficiency (due to long, cumulative experience) of the central power and its officers, the parliaments concerned themselves less and less with matters of an administrative order in the strict sense.  Thus the French parliament  became less and less an administrative and more and more a demagogic body.” 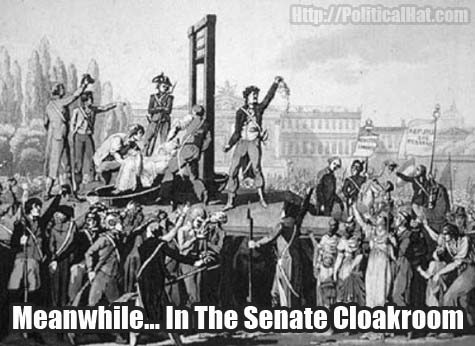 We are seeing a similar, parallel fate here in America:

“This acquiescence is of great consequence. For all the hand-wringing and the righteous indignation that will presumably now be forthcoming, the root cause of the Republican party’s present dilemma is that the body that it leads has largely elected to abdicate its constitutional role — not, as President Obama likes to imply, because it has failed to do what the White House wishes it to do, but because it is proving so shamefully unwilling to defend its authority.”

More so, this is similar to the ultimate fate of the Ancient Roman Senate.

Perhaps Polybius was right to believe that this was the fate of all civilization, and that his praise of Rome would gloss over the weakness that doomed that ancient Roman civic virtue.

Yet again the wheel of fate turns…

This entry was posted in Elections, Progressives and tagged DOOM. Bookmark the permalink.