With the resounding rejection at the ballot box on Nov. 4th, Obama has clearly decided to go after a new mark for his deceitful scams.  The number one target? Australia. 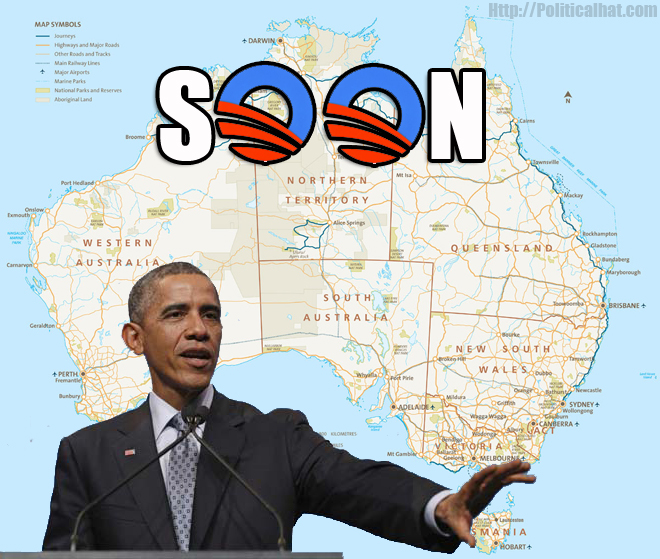 Obama recently spoke at the University of Queensland:

While he praises democracy and declares his love for America’s allies, his ranting is all to familiar to Americans, whose ability to discern his deceit has grown.  For example, Obama’s international “leadership” is little more than a social media propaganda campaign, yet Obama still thinks people will buy garbage like this:

“We’re leading the international community in the fight to destroy the terrorist group ISIL.  We’re leading in dealing with Ebola in West Africa and in opposing Russia’s aggression against Ukraine — which is a threat to the world, as we saw in the appalling shoot-down of MH17, a tragedy that took so many innocent lives, among them your fellow citizens.”

There was also a bit of regret that there remain actual journalists who don’t blingly parrot the White House’s propaganda:

“I had a town hall meeting with young people like you, in which they were asking, what does it mean to create rule of law?  And how should we deal with ethnic diversity in our city?  You could feel the excitement.  What does a free press look like, and how does it operate?  And how do we make sure that journalism is responsible?”

“So we’ve very proud of the work that we have already done.  We are mindful of the great work that still has to be done on this issue.  But let me say, particularly again to the young people here:  Combating climate change cannot be the work of governments alone.  Citizens, especially the next generation, you have to keep raising your voices, because you deserve to live your lives in a world that is cleaner and that is healthier and that is sustainable.  But that is not going to happen unless you are heard.”

In contrast, Australia’s Prime Minister Tony Abbott has shown a spine when standing up to Gaia-worshiping totalitarians:

This entry was posted in Progressives, War & Terror and tagged Green, Obama, SCoaMF. Bookmark the permalink.

2 Responses to No Longer Able to Fool America, Obama Tries to Scam Australia