Ah, glorious revolutionary communism, were all the proletariat is equal… but rock star nomenklatura schmucks are more equal than others.

Recently, Rage Whine against the Machine’s Tom Morello threw a temper tantrum because he wasn’t given a private room in an already full restaurant:

Five Point restaurant in Seattle is the WORST. Super rude & anti-worker. Shittiest doorman in the Northwest. Prick. Spread the word.

@tmorello The 5 Point's owner has been campaigning to raise min wage to $15 & offers health insurance to all employees.

@tmorello They were at capacity & you wanted a "private room". Think before you tweet, rock star.

And just how does Tom Morello “fight the power”?

The restaurant and the owner chimed in with a little reality:

@tmorello @jeffonjackYYC Tom have you lost your mind? Now you're accusing our doorman of being racist? All are equal at The 5 Point. Sorry.

@tmorello @stabulousness Tom – if that's bullshit, then reach out to me directly. My staff would disagree. Maybe check yourself.

@tmorello we are or were fans of you & your work. Our staff are very cool & when they aren't it's typically a reflection of the customer 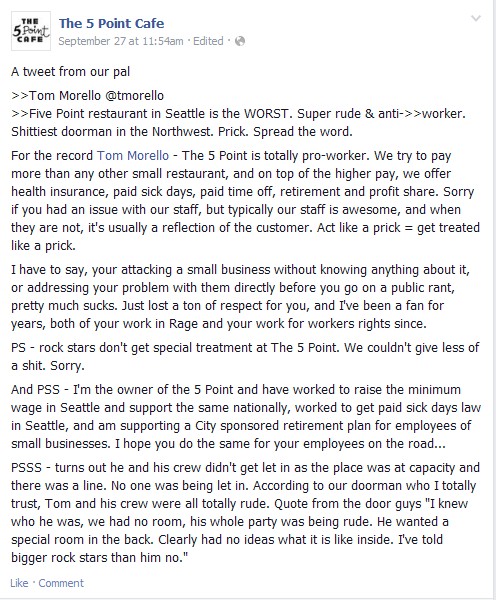 Even with all that, his worshipfulness still doesn’t get it.

Tom, you are not forgiven, and you’ve already been given far too much leniency.

This entry was posted in Progressives and tagged Communism, FAIL. Bookmark the permalink.