Lawfare (Noun): Use of law or threat of law to control or eliminate ideological opposition.

Governor Rick Perry has been indicted by a rubber stamp grand jury (apparently there were no ham sandwiches around) for abuse of official capacity and coercion of a public servant.  Just what was this dastardly deed?  Exercising his constitutional right to veto legislation.

This is just another example of “lawfare” by the Left.  They used it against Gov. Scott Walker, Gov. Chris Christi, and Lt. Gov. Krolicki.  They are using it now.

So, just what happened?  The Travis County DA was arrested for alcohol related shenanigans and ended up being quite violent and willing to use here lofty status of District Attorney as a “get out of jail free card.”  She was arrested, convicted, and sentenced to 45 days.  Because of this, Perry wanted her to resign, and bluntly stated he’s veto state funding that would be under her inebriated control.  He followed through; The drunken D.A. was then presented with an indictment against the governor. 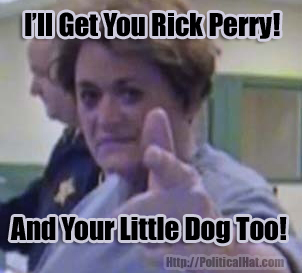 The problem with the indictment is that the governor has the explicit power to veto anything he darn well wants.

The first count of indictment claims that he “misused government property” by holding “such property” as the fiscal allocation to the drunken D.A. which has come into the D.A.’s custody.  The thing is that that is factually wrong.  The legislature passed the appropriation, but Perry vetoed that, which means that the money was never legally transferred to the D.A.’s custody since the allocation was never approved by the governor or overridden by the legislature.  The second count assumes that the power of the governor’s veto is somehow limited because a drunken nutjob throws a legal hissy-fit.  Too bad the state constitution disagrees!  Is it really a crime to keep state funds from the drunken district attorney seen below?

The idiocy of the indictment can be seen below: 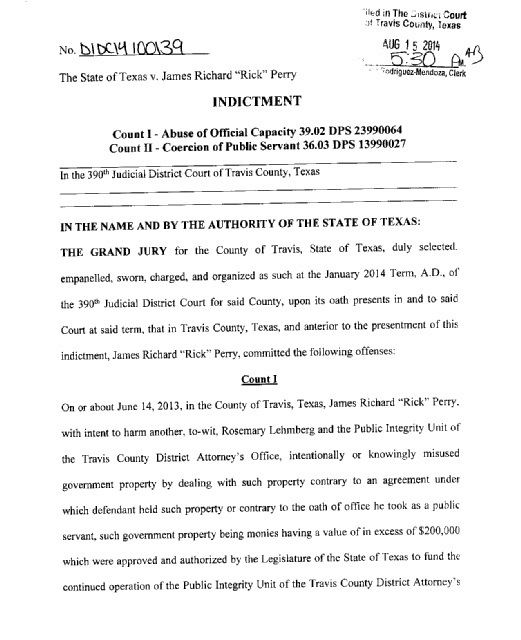 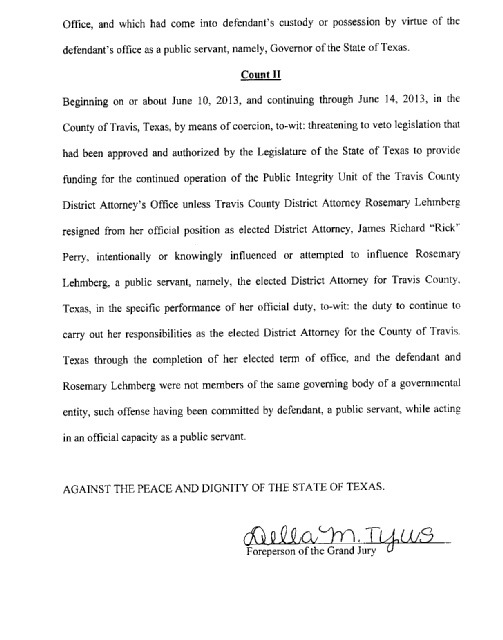 This entry was posted in Elections, Progressives and tagged Leviathan. Bookmark the permalink.