Capital and Labor United Against Workers

Workers at a Tennessee Volkswagen plant have already voted against forming a union, but they are going to get a union anyway, and with the support of Volkswagen itself.

The United Auto Workers is forming a chapter regardless of the wishes of the majority of workers.  While it will not have exclusive bargaining rights, it will be working with Volkswagen anyway.  The UAW’s International President “pledged that the union would work with Volkswagen to train and educate the workers” after reaching a “consensus” with the corporatist Volkswagen.

Both the UAW and Volkswagen want to form a corporatist German style “workers Soviet council,” were purportedly the “workers” will have a say in how the auto plant is run… unless when their say is contrary to the wishes of the union and the company! 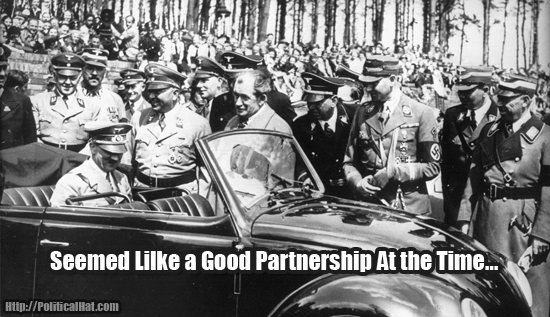 Another “benefit” to the unions is that this would allow them to “avoid the need for another election that could involve ‘third-party interference.'”

This is like a microcosm of Europe being forcibly transplanted to Tennessee, and much like the European Union with its constitution, the UAW will ignore the will of those who voted and do what it wants anyway.

This entry was posted in Progressives and tagged Economy, Europe, Unions. Bookmark the permalink.