America’s Youth Are in the Worst of Hands

Remember how in the 2nd World War, the United States fought against the evil of capitalism?  No, of course not because the war against Germany was against the National Socialists!  Too bad this teacher didn’t get the memo:

It's now 69 years since the Nazi regime collapsed. Let's recall the blood lust of unfettered capitalism & the courage of those who fought it

Her response to the inevitable Twitter critics was to simply whine that they weren’t really socialists, but just called themselves that!  In fact, the National Socialists though of free-market capitalism as a Jewish economic system where the elite Jews oppressed the German masses: In effect, the Jews were the “one percent” to the German people’s “ninety nine percent,” with the National Socialists being the “Occupy” movement of its day. 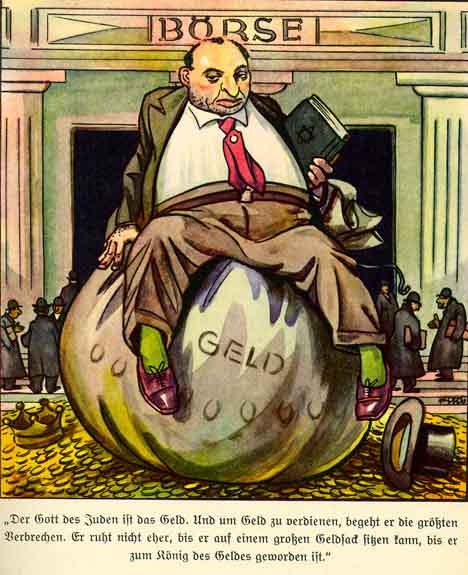 The NAZI’s own platform consisted of an explicitly socialist economic policy.  Some of the socialist points of their 25-point program included:

7. We demand that the state be charged first with providing the opportunity for a livelihood and way of life for the citizens.

9. All citizens must have equal rights and obligations.

10. The first obligation of every citizen must be to work both spiritually and physically. The activity of individuals is not to counteract the interests of the universality, but must have its result within the framework of the whole for the benefit of all. Consequently we demand:

12. In consideration of the monstrous sacrifice in property and blood that each war demands of the people, personal enrichment through a war must be designated as a crime against the people. Therefore we demand the total confiscation of all war profits.

13. We demand the nationalisation of all (previous) associated industries (trusts).

14. We demand a division of profits of all heavy industries.

15. We demand an expansion on a large scale of old age welfare.

16. We demand the creation of a healthy middle class and its conservation, immediate communalization of the great warehouses and their being leased at low cost to small firms, the utmost consideration of all small firms in contracts with the State, county or municipality.

17. We demand a land reform suitable to our needs, provision of a law for the free expropriation of land for the purposes of public utility, abolition of taxes on land and prevention of all speculation in land.

20. The state is to be responsible for a fundamental reconstruction of our whole national education program, to enable every capable and industrious German to obtain higher education and subsequently introduction into leading positions. The plans of instruction of all educational institutions are to conform with the experiences of practical life. The comprehension of the concept of the State must be striven for by the school [Staatsbürgerkunde] as early as the beginning of understanding. We demand the education at the expense of the State of outstanding intellectually gifted children of poor parents without consideration of position or profession.

21. The State is to care for the elevating national health by protecting the mother and child, by outlawing child-labor, by the encouragement of physical fitness, by means of the legal establishment of a gymnastic and sport obligation, by the utmost support of all organizations concerned with the physical instruction of the young.

Of course, one must remember that Hitler was the leader of the moderate faction of the National Socialists, who only cemented power by opposing the even more extreme elements of the  Nationalsozialistische Deutsche Arbeiterpartei!

Corporatism is a way of organizing the economic life of a country under the direction of the state. It is the state that creates a corporatist economy, not the free market.

Fascism, and even National Socialism was actually two of the more egalitarian strains of the Left.  Rather than pit class against class, they emphasized the equality and unity of the nation and the race, respectively.  So, rather than just liquidate the German equivalent of Kulaks, they sought to bring both labor and business into the control of the state, which was the embodiment of the Volk (i.e. the collective conscious of the people), for the betterment of all.

While they may not have immediately carried through on all their promises, or taken a slower approach that the more radical National Socialists would have wanted, it was still a program of socialized control.

The “bloodlust” of the National Socialists was based on sacrificing individual, both German and non-German, for the benefit of the collective whole.  NAZI Germany waged war for the collective, not capitalism.  The United State and Britain didn’t go to war with NAZI Germany to fight capitalism, but to defeat a Leftist monster.

To suggest otherwise is the epitome of historical revisionism.  But then, we’ve always been at war with Eastasia, right?

This entry was posted in Education, Progressives and tagged FAIL, Higher Ed. Bookmark the permalink.