The Democrats in the California Legislature Grand Soviet, have a 2/3 majority in each chamber (leaves of absence aside).  They decided to use that power to partially repeal the California Civil Rights Initiative (i.e. Prop. 209), which they passed out of the state Senate as SCA5, with the requisite 2/3 majority vote (27 to 9).  All they had to do was get a similar vote out of the state Assembly and then it would be put before an increasingly Left-wing electorate. 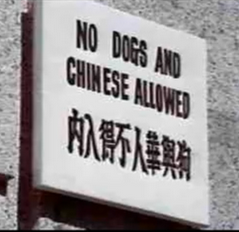 But a funny thing happened on the way to reinstating Affirmative Action: Asian Americans revolted against it.

“Asians in the San Gabriel Valley and beyond joined forces Friday to rally against a proposed Senate constitutional amendment that they said would punish their children for working hard to achieve the American Dream.

“State Sen. Ed Hernandez, D-West Covina, is sponsoring SCA 5, an amendment that would repeal portions of Proposition 209, which prohibited discrimination against people based on their unchangeable identities. If passed, the amendment would allow public education institutions to give preferential treatment on the basis of race, sex, color, ethnicity or national origin.”

SCA5 has been withdrawn, for now, after the Assembly Speaker pulled the bill and three state Senate Democrats (all Asian-American) switched their positions to be against it.

In 1996, when Prop. 209 was passed, 61% of Asian Americans voted against it.  Why the difference now?  To put it simply, they are running out of White people to kick around.  Asian Americans are now a larger share of the electorate than Blacks, and about half as big as Hispanics.  Since 1996, Whites have not only become a minority, but are now not even the biggest minority.  In the University of California, Whites have about the same percentage of the incoming students as Hispanics do.  Asian Americans are very over-represented to the point that they are an outright majority in some campuses, such as in UC Irvine and UC San Diego.

Clearly, then, any attempt to inflate Hispanic, American Indian, and Black numbers will have to mean denying admission primarily against Asian Americans.  Certainly, “Asian American” is not a monolithic bloc, with many of those of a South-East Asian ethnicity being not so over represented, which means that other Asian American groups are even more over-represented.  And it is they who will be targeted for discrimination.  Of course, that “White” people are hardly a monolithic bloc seems to escape those who point out that Asian Americans aren’t either.

“Diversity” and racial “equity” is a zero-sum game:  In order to get more of one race,  you have to reduce the numbers of other races.  When Whites were a larger percentage of the state’s population and enrollment in the University of California, it was easy to play the “diversity game” in such a way that targeted them.  But when you start running out of White people to kick around, “diversity” and the racial “re-balancing” requires that you have to start discriminating against non-White racial and ethnic groups to boost the numbers of the “under-represented” ones.  Affirmative Actions seems all fine and dandy, until you are the one getting screwed over.

This is also fair warning to the California Democrats:  No longer can they get away with grabbing all the non-White demographic groups by being the defenders against the eeevil White oppressors.  Their boogie-man is no longer a threat, and they can’t beat that dead horse any longer.

Affirmative Action and racial diversity do not, and can not, mix.