Common Core Bonds in a Knot

Some of the major problems with Common Core is that the materials are made by people who don’t understand what is being taught, teachers who don’t know how to teach it, and the use of jargon that makes Cockney rhyming slang seem transparently obvious.

Take for example the following:

My 9 year old sisters math homework with this "common core" shit. WHAT ARE THESE DIRECTIONS. pic.twitter.com/GNw0uumhuR

If presented in a proper manner, it does make sense.  Adding 3 to 7 will result in 10, and taking 3 from the other 7 will result in 4, which makes adding the two numbers easy.  Of course, this only makes sense if the student already understands the basics of addition and subtraction, as well as intuitively understands that one is rounding up one number to 10 while rounding down the other numbers equivalently.  The problem with the above example, is that is does not explain why you split 7 into 3 and 4.  The student would just go through the motion without actually understanding why it is done the way it is!

Unfortunately, these things are not explained.  Furthermore, instead of explaining it, children are forced into word problems that often turn into word puzzles and trick questions.  Take for example, the following: 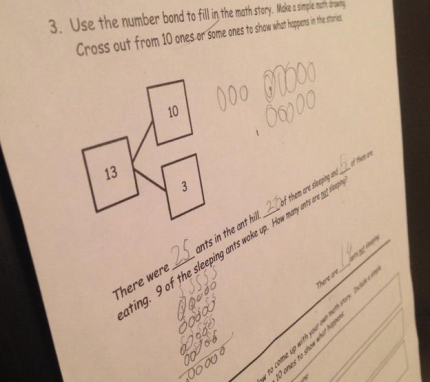 “Use the number bond to fill in the math story. Make a simple math drawing. Cross out from 10 ones or some ones to show what happens in the stories.

The number of act eating are irrelevant.  Clearly, you determine how many ants were already away by subtracting the number of sleeping ant from the total, and then add the nine ants that awoke.  But this is easy to figure out if you already understand basic arithmetic.  Children just leaning can become confused, especially when the red herring of ants that are eating is thrown in.  Unless they understand the principles, they might not understand how to derive the relevant information and arithmetically manipulate it.

Sadly, often this results in confusing jargon being used to obfuscate the lesson, thus preventing the parents from helping teach their own children.  In essence, this means that parents are purged from the educational process and professional “educators” are more secure in their public school satrapies.

A perfect example can be seen below:

It just goes to show that the government will not trust the future of what it considers to be its children to mere parents.

This entry was posted in Education, Progressives and tagged FAIL. Bookmark the permalink.

One Response to Common Core Bonds in a Knot