Back when Leftist campus radicals were more than a sad pathetic joke, “direct action” was one of the methods and threats they used to get campuses to do what they wanted. 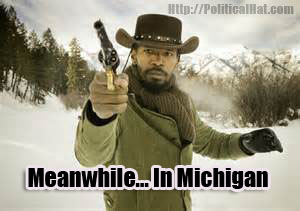 What is old is new again, as the University of Michigan Black Student Union (BSU) has threatened “physical action” unless their seven demands are met.  Among these demands are a demand that people be indoctrinated about how White people are evil, Affirmative Action to raise the number of Blacks by denying admission to others, a free reign to implement “change” according to their dictates, and of course $$$.

In effect, if the university doesn’t pony up all these demands, including money, the BSU will engage in “physical action.”

In effect, the BSU is running a protection racket.

The administration has at least in part surrendered to these thug tactics.

At least they haven’t sunk to the level of evil of Angela Davis… yet.

One Response to What is Old is New Again: College Leftists Threaten “Physical Action”