A recent “research” article declared that “simply owning a firearm may also lead whites to develop more negative attitudes toward blacks.”  According to this “scientific” research, people who support their 2nd Amendment liberties are RAAACIST!

That reality is quite contrary to this doesn’t bother the authors in the least. 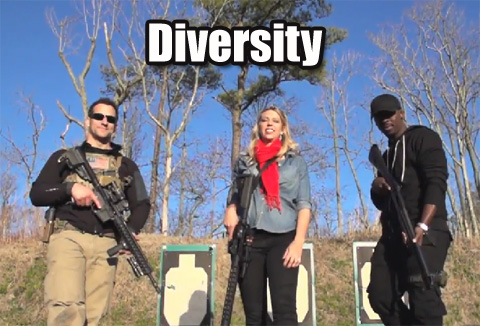 They base this not on blatant racist attitude but on “symbolic racism (racial resentment), an explicit but subtle form and measure of racism, [which] has been found to be consistently related to peoples decisions regarding policies that may affect non-white US citizens.”

And just what is “symbolic racism”?

It is a demonstration of the authors own prejudice that “traditional” values.  It is yet another attack by cultural Marxists that is so ingrained in pseudo-academia, that they don’t even notice it.  Of course, the authors admit that the measurement of “symbolic racism” may have been flawed since it was “possible that participants may not have completed this complex computerized task correctly.”  So, they come to a conclusion with data that even they themselves admit is questionable at best.

Yes, the authors did come right out and say that an inanimate object makes people violent.  They go on to state that “US whites oppose strong gun reform more than all other racial groups, despite a much greater likelihood that whites will kill themselves with their guns (suicide), than be killed by someone else.”  So, as far as the authors can figure, the Whites should oppose gun ownership because other people who are White might be suicidal.  This is a ludicrous assumption, yet one of the lynchpins of their conclusion that because the only logical conclusion, in their opinion, to the statistic that White people are more statistically likely to kill themselves with guns ought to be for White people to oppose guns.  Because of their own narrow minded thinking, the only reason they could think of was racism to explain this so-called paradox:

“Symbolic racism appears to play a role in explaining gun ownership and paradoxical attitudes to gun control in US whites. In other words, despite certain policy changes potentially benefitting whites, anti-black prejudice leads people to oppose their implementation.”

The authors did hint at a truth, most likely completely unintentionally, that gun control is motivated by true racism:

“Stronger opposition to gun control by US whites has not always been the case. During the civil rights movement of the late 60 s, black activists exercised their right to carry loaded firearms in order to provide protection from police and extreme white factions. The response from US whites was to demand stricter gun control.”

Guns have been used by Blacks, Asians, American Indians, and Gay people to defend themselves against racism, bigotry, or just plain self-defense.  Guns do not cause racism.  They stop it.

4 Responses to Guns and Racism