Paid To Kill; Paid To Die

“Free” healthcare provided by the government ex nihilo is touted as a fundamental human right by the Left.  But TANSTAAFL — There Ain’t No Such Thing As A Free Lobotomy, so as to speak… 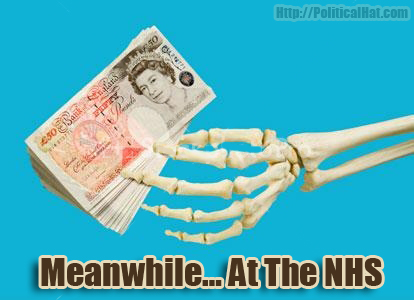 Britain’s National Health Service (NHS) is now facing the prospect of charging people at the point of use for enjoying their “fundamental human right”:

“Stagnant health spending combined with ever rising costs and demand mean the NHS is facing “the most challenging period in its 65-year existence”, the NHS Confederation said, as the membership body that brings together all NHS providers launched its 2015 Challenge.

“In a frank assessment of the dangers faced by the health service, senior officials at the confederation say that the two years following the next general election will be pivotal in deciding whether the NHS can continue to provide free health care for all patients.”

That’s the thing with “positive rights” where you get free stuff that other people have to pay for:  Sooner or later, you run out of other people’s money.

Doctors are being paid £50 bonuses for signing up elderly patients on “death lists”!  They get this bonus for getting elderly patients, who may not survive the year, for “shifting” the place of death to a much cheaper hospice where the NHS would save around £1,000.  In other words, rather than try to fight and save the patient, the patients would be cajoled by the bonus-seeking doctor to just go dies somewhere else and not bother the NHS!  Further:

“[P] patients signing up to die in their own home may unwittingly be ‘closing the door on potentially life-saving hospital treatment’. … ‘A doctor may not realise that, while the person appears to be dying, they actually have a reversible condition.'”