The now bankrupt and destroyed makers of tasty treats, Hostess, was destroyed last year by the Bakery, Confectionery, Tobacco Workers and Grain Millers International Union. That union went on strike, even though the Teamsters pointed out to them that the company could not survive and would have to fold.

The loss of the union members’ jobs was hailed as a victory by the union. While on the surface it seemed almost deranged for the union member to vote to lose their jobs, it turns out that the Federal Government had their back all along. The U.S. Department of Labor announced that over 18,000 former Hostess workers will gain benefits from the “Trade Adjustment Assistance:

“Those who qualify may receive case management and re-employment services, training in new occupational skills and/or trade readjustment allowances that provide income support for workers enrolled in training. Workers may also receive job search and relocation allowances, and the Health Coverage Tax Credit.

“While TAA is open to eligible workers of all ages, workers 50 years of age and older may elect to receive Re-employment Trade Adjustment Assistance instead. If a worker obtains new employment at wages less than $50,000 and less than those earned in the trade-impacted employment, the RTAA program will pay 50 percent of the difference between the old wage and the new wage, up to $10,000 over a two-year period. RTAA participants may also be eligible for retraining and the HCTC.”

Labor unions were originally meant to empower workers so that they could bargain with large companies on an equal basis. But with the Federal Government effectively propping up and subsidizing the union workers, the union gained an unfair advantage over Hostess, such that they could lay siege to a company and destroy it with de facto impunity to themselves.

The “NEW Union Label” is even more true today than it ever was: 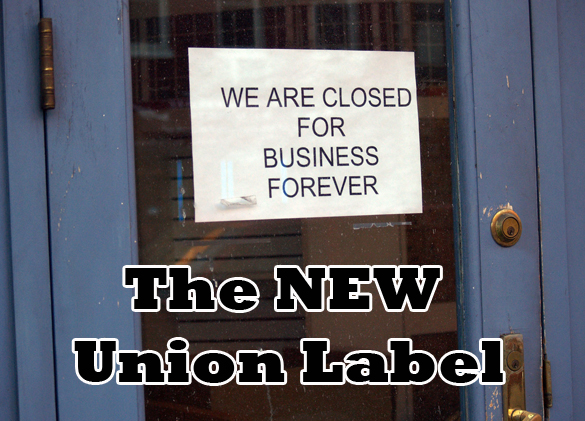 This entry was posted in Uncategorized and tagged Leviathan, Unions. Bookmark the permalink.

One Response to Company-wrecking Union Subsidized by Uncle Sam