A Case in Point: The Failure of Higher Education

The University of Nevada, Las Vegas has often played second fiddle to its elder sibling in the Nevada System of Higher Education, the University of Nevada, Reno. Though UNLV has so far successfully avoided having a psycho killer named after them like UNR did, they are still stuck between becoming a premier research university, and a glorified community college. 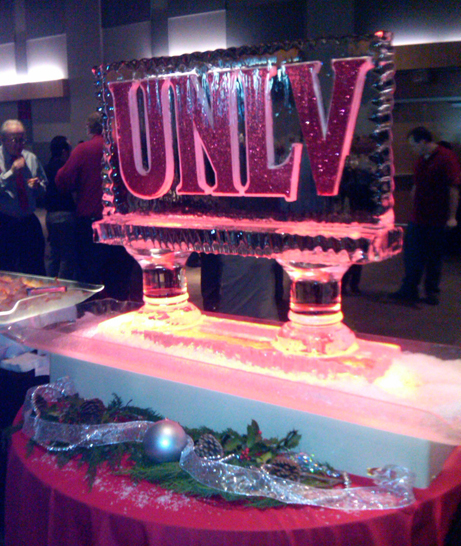 TANSTAAFL Fail: Ice Sculpture UNLV got "for free" from the food vending company they pay for

At UNLV, only 1 in 10 students graduate within four years, and less than 4 in 10 graduate after 10. In contrast, UNR graduates nearly half of its students. When “almost” half of student graduating seems like a worthy goal to work up to, it is clear that UNLV needs to focus on academic teaching and attracting quality professors by providing an environment conducive towards cutting edge research.

Unfortunately, the leadership at the University has decided to prioritize form over function. The “Master Plan” for UNLV has been recently revised. While there are plans for new buildings for teaching, the main emphases is on building a “Student Village,” a money making “Mega Events Center,” and an attempt to turn nearby areas into a “community” like other prestigious universities have. UNLV President Neil Smatrisk even goes so far as to say: “[T]hese efforts will create a vibrant, authentic and genuine university district in Southern Nevada.”

Therein lies the problem. The emphasis is not on academic success and building a research environment and infrastructure (building, equipment, or staff) that will attract quality Professors to teach and engage in ground-breaking research. The emphasis is in creating the superficial veneer that other successful universities have. Just as it is Middle Class values that lead to financial stability and comfortable income, and not giving handouts to people in the hopes that those Middle Class values spontaneously pop into existance ex nihilo, it must be academic and research quality and actual achievement that will make the university great, and not simply allowing what money the university does have be spent on empty trappings and other spiffy sounding things.

This misuse of funds can be seen by a myriad number of other examples. Here are but three examples:

Political Correctness: A plethora of “diversity” officers, up to and including a “vice-President for Diversity” suck resources from actual academic teaching and research infrastructure. Instead of building laboratories, buying the equipment, or hiring staff to provide the resources to attract serious scholars and researchers, the university wastes time, energy, and resources on building a “multicultural center” or creating a “Center for Social Justice.” Considering the dark aims of those on the Progressive left to misuse the term “justice” until it becomes its antonym, this stands in contrast with the proper goal of a public university: To teach and communicate our own culture and civilization to aid in its continuance and further existence. That UNLV engages in “centers” that are set on destroying this is unconceivable and unforgivable.

Luxury Amenities: UNLV is quite heavily a commuter campus. The dorms are usually only half in use. That Smatrisk wants to spend even more money to create a “student village” to house and provide a spiffy experience for students who have already demonstrated that they don’t want on-campus housing is ridiculous. Furthermore, this just feeds into the continual mutation of universities from places of serious scholarly learning, to four year vacations for young people to “find themselves” and party before being hit with their massive student loan bills. Clearly the “leadership” at UNLV clearly believes that a quality education is less important than such amenities as seen at the “Student Wellness Center”:

Buying a Closed Down Fast Food Restaurant: UNLV purchased a closed down building that used to house a Carl’s Junior. They did not buy the Carl’s Junior, but just the building designed for fast food usage. They spent $940,000 for a property valued at under $635,000. That is money that could have been used to pay for almost two hundred students tuition, or paid for graduate students engaging in groundbreaking research, for a dozen new Professors, or resources that would attract researchers to UNLV.

Ultimately, these are just more indications that universities such as UNLV have moved away from scholarly pursuits such as academics and research, and on to, as the mission statement for UNLV says,: “[C]onfront[ing] the challenges of economic and cultural diversification, urban growth, social justice, and sustainability.”

This entry was posted in Education and tagged FAIL, Higher Ed, Nevada. Bookmark the permalink.