Posted on November 4, 2012 by The Political Hat

At the last of the 2012 Presidential Debates, Gov. Romney spoke of the need to keep up the Navy’s fleet strength in order for it to fulfill its mandated missions. Pres. Obama belittled this and spoke about “these things called aircraft carriers, where planes land on them. We have these ships that go underwater, nuclear submarines” as if all other navy vessels were as outdated as “horses and bayonets.”

Of course, the military has more bayonets then it did a hundred years ago, and though our reliance on horses may be less, they still have a critical place in the military today.

What are “horses and bayonets” but the individual parts of a unicorn? Does this mean we don’t get the unicorns we were supposed to get from Obama after all? 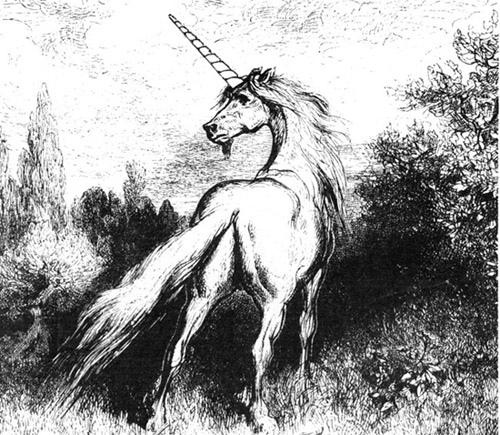 What is striking about Obama’s unicorn logic is that he doesn’t seem to apply this to anything else. Education spending, for example has generally increased above the cost of inflation, and we are spending around a quarter of a million dollars per classroom in failing schools.

If doing more with less is the best choice for the military, then why isn’t this applicable to schools? Better curricula and more efficient use of fund could give better results for what we pay, or even if we paid less. But teachers’ unions are generally favorable to the Democratic coalition, while the brave men and women of our military are not. Ultimately, that is the true unicorn logic of Obama and the left.