In Nazi Germany, the Schutzstaffel (i.e. the ᛋᛋ), required proof of being sufficiently Aryan, with all others to be excluded. In their hypocritical quest for “anti-racism”, multiple city council members in Seattle are pushing for laying off officers based on their race, and in a way create policy-wise the mirror-opposite of the ᛋᛋ. Seattle Councilmember Lorena Gonzalez, for example, believes that White officers haven’t “behaves as good partners” and that such “discrimination for a good cause” is not only acceptable, but desirable as well.

“The Seattle City Council will renew its push to fire white officers within the Seattle Police Department.

“The move comes after a nearly 20% cut to the budget and a loss of nearly 200 officers from the department. The SPD has the lowest deployable rate of officers since 1990, as the city experiences a surge in violent crime, including a 26-year-high murder rate.”

Another city council member, Lisa Herbold, believes that racial discrimination is allowable when it “is in the interest of efficient operations”.

Seattle City Councilmember Lisa Herbold, a supporter of the radical defund movement, suggests the Seattle Police Department fire officers for being white. This wouldn’t just be racist, it would be illegal.

This, of course, is not only illegal, but opposed by the Black chief of police:

“It is illegal to make layoffs based on race and so I’m not sure where she is getting her legal advice from but the persons who are advising us are making sure we understand that it’s illegal to do that.”

When you are imposing a racial purity test for your security test, you might want to ask yourself “are we the baddies”? 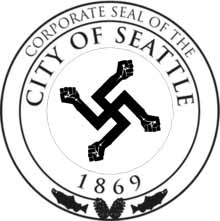 One Response to The Anti-Aryan Guard