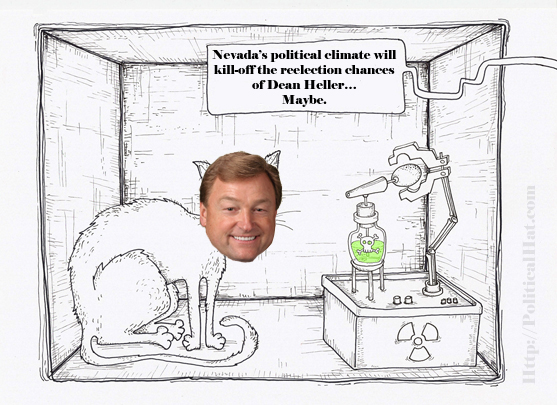 If you ask an ardent Trump supporter, Senator Dean Heller (R-NV) is a RINO who plotted to save Obamacare and otherwise serve as a minion to Democrats.

"We are never going to #MAGA unless we have people who will support the #AmericaFirst agenda" ~ @DannyTarkanian
💯#NVSen against Dean Heller pic.twitter.com/X6nEGnQk97

✅RT and support this Candidate! https://t.co/YKDbMW0nNM

If you ask ardent Left-wing Democrats, he is Donald Trump’s BFF who is trying to not only destroy Obamacare, but kill off the poor (women and minorities hardest hit, of course)… a view which had led to a man being arrested for burgling Heller’s campaign office and even threatening his life.

Nevada MUST vote him out#nvsen

Dean Heller, then, is like Schrödinger’s preverbal cat, being simultaneously two things at the same time.

Perhaps most telling is far-Left activists who are agreeing with hardcore Trump supporters that Dean Heller must be defeated in the U.S. Senate primary by perpetual general election loser Danny Tarkanian:

The only question about the @DannyTarkanian @SenDeanHeller primary is this: Will @realDonaldTrump campaign for Tark? (Answer: Totally.)

Could Heller parlay this into a campaign that identifies him with an independent centrism? Perhaps, but the partisan primary electorate will be unfavorable to him. However, the Republican electorate is more distributed throughout the state, with much more strength in northern Nevada, which still has a bias against southern Nevada candidates when they have a northern Nevada alternative to vote for. So yet again Heller is both doomed and saved, and will remain so until the election, when the box lid is opened.

The @DNC has revealed new billboards they are launching in Nevada this week slamming Dean Heller for #Trumpcare votes. #NVSen pic.twitter.com/FsfkGyk21b

This entry was posted in Elections and tagged Nevada, NVSen. Bookmark the permalink.