It is now being claimed that North Carolina is no longer a “democracy” and thus must be shunned as evil, which is neither here nor there since the U.S. Constitution guarantees the states a republican form of government, and not a democratic one. 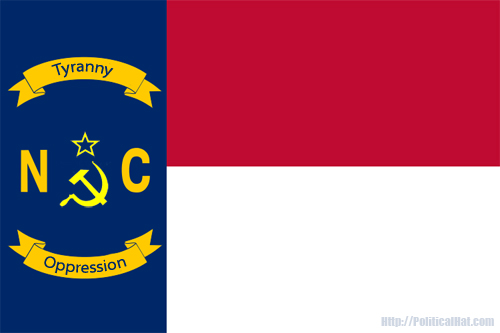 And just what is the alleged evidence for North Carolina’s eschewing of democracy?

“First, legislative power does not depend on the votes of the people. One party wins just half the votes but 100 percent of the power. The GOP has a huge legislative majority giving it absolute veto-proof control with that tiny advantage in the popular vote. The other party wins just a handful of votes less and 0 percent of the legislative power. This is above and beyond the way in which state legislators are detached from democratic accountability as a result of the rigged district boundaries. They are beholden to their party bosses, not the voters. Seventy-six of the 170 (45 percent) incumbent state legislators were not even opposed by the other party in the general election.”

Um, in North Carolina, legislators are elected by the vote of the people. This is because North Carolina is a representative republic, where people vote for individual representatives to act as stewards, rather than a slate of party-selected political insiders like is seen with parliamentary systems with proportional representation, which the author clearly favors.

Since it is not the proper place of a legislature to be society in miniature, but rather serve as chosen stewards, not proportionally representing all voters within an electoral district is hardly an unforgivable sin bereft of all democratic elements. Even in a proportional system, even if elected, a minority voice will not rule but rather acquiesce to the force of the majority.

“Second, democracies do not limit their citizens’ rights on the basis of their born identities. However, this is exactly what the North Carolina legislature did through House Bill 2 (there are an estimated 38,000 transgender Tar Heels), targeted attempts to reduce African-American and Latino access to the vote and pernicious laws to constrain the ability of women to act as autonomous citizens.”

A state or country can be a democracy and nonetheless limit citizens’ rights. A state or country can not be a (classical) liberal democracy if such (classically) illiberal values are the ingrained norm. Furthermore, requiring that people use the restroom appropriate for their biological sex does not limit anyone’s inalienable rights, nor does it affect anyone based on a “born” identity, what with “gender” being a social construct and all.

Insuring the integrity of the vote is something that most “purer democracies” do, or at least strive for, including the European proportional parliamentary bodies.

“Third, government in North Carolina has become arbitrary and detached from popular will. When, in response to losing the governorship, one party uses its legislative dominance to take away significant executive power, it is a direct attack upon the separation of powers that defines American democracy. When a wounded legislative leadership, and a lame-duck executive, force through draconian changes with no time for robust review and debate it leaves Carolina no better than the authoritarian regimes we look down upon.”

Um, “detached from the popular will”? This is what you get when you let bureaucracies run amok and the government acts in an aloof manner, and can indeed happen with “purer democracies” such as with the European proportional parliamentary bodies.

But then, the virtue of a republic over a democracy, is that there is an anti-majoritarian element that serves as a check upon a majority… the same type of a lack of check the author bemoans as being the results of a representative system rather than a proportional parliamentary system.

None of the North Carolina legislature’s actions results in North Carolina somehow losing its status as a “democracy”, unless you believe “democracy” is only “democracy” when it reflects the predetermined narrative of what the volonté générale is supposed to be…

This entry was posted in Elections, Progressives and tagged GOP, Obama, SCoaMF. Bookmark the permalink.

3 Responses to North Carolina and Democracy