The Inequality of Flags

If a school decided to ban the LGBTQ&c. Rainbow H8 flag, the media and the hypocrites over at the ACLU would immediately screech about intolerance and wrap themselves up in the Bill of Rights.

Would they argue such arguments from a content neutral way?  If they did, would they believe it?

If a student had a rainbow flag patch on his or her backpack, the school would probably give them an award. If a student brought a Confederate patch on their backpack… then they go on lockdown.

If you can ban a flag, then you should be able to ban a flag.  But it’s kinda funny how these alleged supporters of civil liberties don’t have a problem with a flag, or any message or exercise of liberty, being banned if they disagree with its message.  For example, the Confederate Battle Flag (and Naval Jack):

“The debate over displaying the Confederate flag has made its way into school parking lots.

“Three students were called to the principal’s office at a Christiansburg, Virginia high school earlier this month and told to remove Confederate symbols from their vehicles. All complied. Two of the students told the Roanoke Times they were threatened with a three-day suspension.

“Christiansburg is the lone school of the county’s four public high schools to have a parking contract requiring that ‘vehicles must be free from displaying any flags or symbols that are deemed offensive to any race, religion, ethnic group, or sexual orientation.'” 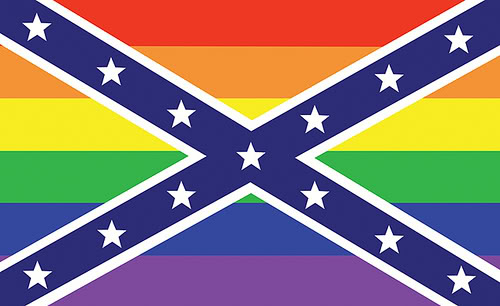 Try banning this one...

Probably not, since the only criteria the ACLU and other Progressive tools have is this: “Does it serve to destroy Christianity and any vestige of Western Civilization?”

2 Responses to The Inequality of Flags