Don’t think that the “Ministry of Truth” from George Orwell’s novel 1984 could ever exist?  Look no further than Google to prove that notion wrong.

“Since stating this morning that they would not be willing to cater a same-sex wedding, the owners of Memories Pizza in Walkerton, Ind., are experiencing the famous ‘tolerance’ of the American Left.

“The description for -Gay Memories Pizza- — which has as its avatar ‘Gay Jesus’ — links to the website [REDACTED], a dating website for gay men.

“None of the nine Memories Pizza-associated images Google Maps provides are related to Memories Pizza. Instead, one finds ‘Boycott Indiana’​ images and cartoons mocking Christians.” 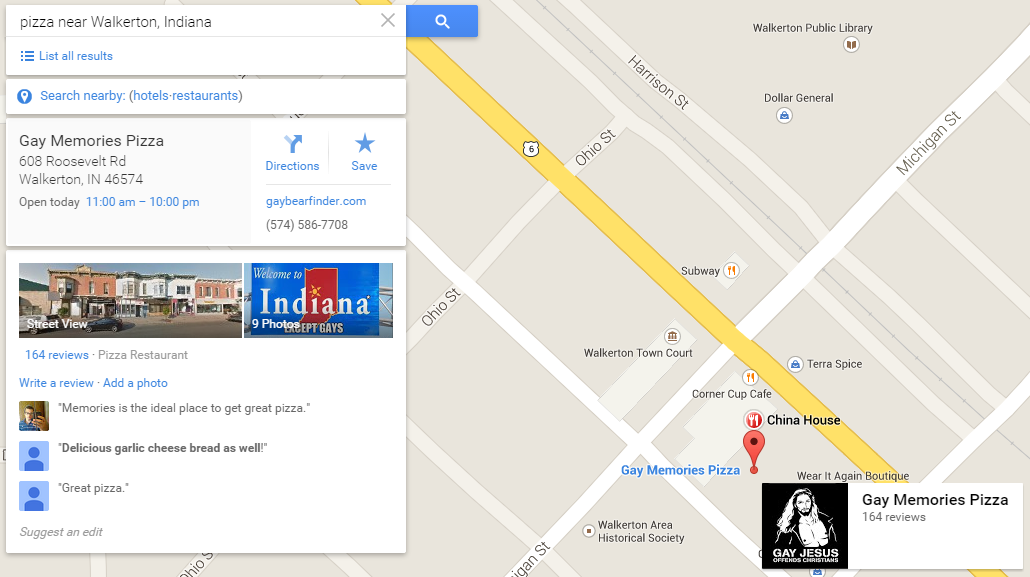 “But Google said that that was done by hackers,” some might cry. Even if true, Google wasn’t exactly gushing with apology, and perhaps, there was silent smiles of approval. After all, were any such “hackers” also Google employees engaging in a Stand Alone Complex? But that company’s name is a synonym for “web search” and millions upon millions blindly follow their search results.  But what really pushes this into Orwellian territory is that they are musing a plan to rank their search results according to their opinion of the “truth,” wherein such bias, though more subtle, would become formal policy.  They would:

“[rank] websites based on the trustworthiness and factual accuracy of web sources. This new system would rely on Google’s own Knowledge Vault and a number of other metrics to gauge the accuracy of the information on a page.”

Considering the clear bias they have demonstrated, including their selective celebrations at their homepage, in addition to their dominance and monopolistic goals, they are clearly aiming to be the new “MiniTru” in the Progressive world of corporatism.

Seems that their real motto is “don’t be evil”.

P.S. – The desecration of the search results for Memorial Pizza not being caused by the formal policy of Google was clarified in the article.

This entry was posted in Progressives, Science and tagged Leviathan, Social Justice. Bookmark the permalink.

2 Responses to Google has become MiniTru