A Glimmer of Hope for Free Speech in Australia

Australia’s 1975 Racial Discrimination Act, in section 18c, makes it illegal to cause someone else to feel offense if that offense is racially based.  In effect this means that incorrect thinking will be banned.  There are a few “exceptions” in 18d, but that is an affirmative defense where one must show that the statement was made in “good faith” and was not a “lie.” 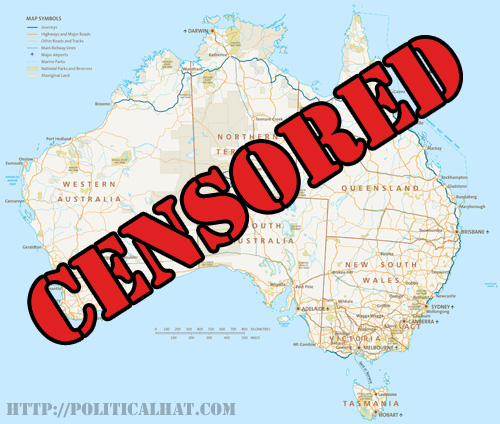 A recent case where a man, Andrew Bolt, was found guilty of giving racial offense and “lying” by simply saying that some people who call themselves “aborigine” are mostly racially and culturally not “aborigine” and that is was ridiculous that they should put themselves forward as leaders of the “aborigine” people.  Apparently, that that the targets of his belittlement disagreed somehow proved that their opinion was fact, and that those who dissented were thus guilty.

Australia’s Attorney-General wants to change that.  Unsurprisingly he is being attacked for saying a person has a right to be a bigot:

“People do have a right to be bigots.  In a free country people do have rights to say things that other people find offensive or insulting or bigoted

The proposed change, though, does not completely get rid of the restrictions, but rather just restrains the law to cover propagation of hate rather than simply giving offense.  The new proposed amendment of the act would also only make statement prosecutable if “an ordinary reasonable member of the Australian community” found it offensive, rather than the standards of any particular group.

This is a minor step forward, but an important one.

The article that caused the force of the state to crush Bolt’s freedom of speech quoted below in full.

AS you see, the two men above are from a tribe of people who face terrible racism just because of the colour of their skin.

So you’ll be thrilled that both have won a rare opportunity – one offered to their race alone to end such injustice.

The man to the right, Sydney arts academic Danie Mellor, this week won our richest prize for Aboriginal artists – the $40,000 Telstra Award.

And the man to the left, Sydney law academic Mark McMillan, has won one of our richest prizes for Aboriginal students – the Fulbright Indigenous Scholarship.

If, studying the faces of these two “Aboriginal” men you think this is surely the most amazing stretch of definition, you’re wrong.

But that’s modern race politics at our universities and anywhere else where grants and privileges are now doled out.

Hear that scuffling at the trough? That’s the sound of black people being elbowed out by white people shouting “but I’m Aboriginal, too”. Hark! – is that a man’s voice I now hear bellowing: “And I’m an Aboriginal woman.”

You see, Mellor and McMillan are representatives of a booming new class of victim you’d never have imagined we’d have to support with special prizes and jobs.

They are “white Aborigines” – people who, out of their multi-stranded but largely European genealogy, decide to identify with the thinnest of all those strands, and the one that’s contributed least to their looks. Yes, the Aboriginal one now so fashionable among artists and academics.

Let McMillan himself describe the torture he’s faced as a result – the shocking pain of having not been discriminated against for being black.

“I am a blonde-haired, blue-eyed, fair-skinned Aboriginal Australian . . .

“As a child, I grew up expecting everyone to be like me, to look like me – with the blonde hair and blue eyes.

“Clearly, my naive ideas about how Aboriginal people were ‘supposed’ to look were wrong. But being Aboriginal and fair and blonde was normal to me and I grew up in a world where I was treated ‘normally’ . . .

“Impeding my growth from that young person into the adult I wanted to become was the profound issue of identity. I was a white black man . . . I was becoming a victim.”

You’d swear this was from a satire — a local version of Sasha Baron Cohen’s jive-talking routine as the fashionably aggrieved white rapper Ali G, complaining: “Is it cos I is black?”

But no, this is meant seriously, and serious perks and Aboriginal-only benefits flow as a consequence.

McMillan – whose confusion about his identity leads him also to declare he’s both a “proud gay” and a “proud father” – has received all the special help you once thought, when writing the taxman another cheque, would at least go to people who looked Aboriginal, but which is increasingly lavished on folk as pink in face as they are in politics.

Now he’s a researcher at Jumbunna Indigenous House of Learning at the University of Technology, Sydney – an “indigenous” outfit run by the very pale Prof Larissa Behrendt, who may have been raised by her white mother but today, as a professional Aborigine, is chairman of our biggest taxpayer-funded Aboriginal television service.

The blue-eyed and ginger-haired Mellor has been similarly privileged, despite having an “American-Australian” father and a mother with only part-Aboriginal ancestry in her otherwise Irish-Australian past.

He now lectures on “Indigenous and Western perspectives of culture and history” at Sydney University and his indigenous art now hangs in most of our national and state art collections.

Nor are Mellor, McMillan and Behrendt atypical or even rare as “white Aborigines”.

St Kilda artist Bindi Cole, raised by her English mother, explored her own pain at being too white in a Next Wave Festival show, Not Really Aboriginal, for which she photographed herself with black powder all over her distressingly white face.

Blond Annette Sax, daughter of a Swiss immigrant, also identified herself as a “white Koori”, which fortuitously allowed her to make the shortlist for the Victorian Indigenous Art Award, alongside other Aboriginal artists as pale as a blank canvas.

T HE auburn-haired Tara Jane Winch was just as lucky. She needed to write just one book — and say her dad had Afghan-Aboriginal ancestry – for the Australia Council to snap her up as its Indigenous Literacy Project ambassador.

I’ve written before of a dozen similar cases, several even more incongruous.

For instance, how can Graham Atkinson be co-chair of the Victorian Traditional Owners Land Justice Group when his right to call himself Aboriginal rests on little more than the fact that his Indian great-grandfather married a part-Aboriginal woman?

Yes, yes, I know. What business is it of anyone else how we identify ourselves? In fact, we’re so refreshingly non-judgmental these days – so big-hugs-for-all – that the federal Human Rights Commission wants our laws changed so a man can even call himself a woman, should he feel like it.

Hear it from the HRC itself: “The evidentiary requirements for the legal recognition of sex should be relaxed by . . . making greater allowance for people to self-identify their sex.”

Lovely! Soon there’ll be no end of white men claiming prizes meant for black women. And don’t dare then tell the HRC’s anti-discrimination police you object.

Yet I do object, and not just because I refuse to surrender my reason and pretend white really is black, just to aid some artist’s self-actualisation therapy.

That way lies madness, where truth is just a whim and words mean nothing.

I refuse also for two other reasons that should be important to us all.

First, of course, is that the special encouragements and prizes we set aside for Aborigines are actually meant for . . . well, Aborigines. You know, the ones we fear would get nothing, if we didn’t offer a bit extra, just for them.

So when a privileged white Aborigine then snaffles that extra, odds are that an underprivileged black Aborigine misses out on the very things we hoped would help them most.

Take Mellor’s art prize. This white university lecturer, with his nice Canberra studio, has by winning pushed aside real draw-in-the-dirt Aboriginal artists such as Dorothy Napangardi, Mitjili Napanangka Gibson and Walangkura Napanangka, who’d also entered and could really have used that cash and recognition.

DOES this make sense? What’s an Aboriginal art prize for, if a man as white and cosseted as Mellor can win it, and with a work that shows no real Aboriginal techniques or traditions?

What’s a black Aboriginal artist from the bush to think, seeing yet another white man lope back to the city with the goodies?

Same with McMillan. When a man as white as I, already a lawyer with a job, wins a prize meant to encourage and inspire hard-struggle black students, what must those Aborigines conclude?

And here’s my other objection.

Seeking power and reassurance in a racial identity is not just weak – a surrendering of your individuality, and a borrowing of other people’s glories.

It’s also exactly what we have too much of already.

The noble ideal of Australia, that we judge each other by our character and deeds, and not our faith, fortune or fatherland, is breaking down. We’re not yet a nation of tribes, but that’s sure the way we’re heading.

I’ve never before seen so many Australian-born people identify themselves by their ethnicity, whether by joining ethnic gangs, living in ethnic enclaves, forming ethnic clubs, demanding ethnic television, playing in ethnic sports clubs, or grabbing ethnic prizes and grants.

Why is that a problem? Because people who feel they owe most to their tribe tend to feel they owe less to the rest. At its worst, it’s them against us.

Feel that fracturing yourself?

So when even academics and artists now spurn the chance to be people of our better future – people of every ethnicity but none – and sign up instead as white Aborigines, insisting on differences invisible to the eye, how much is there left to hold us together?

Update: Linked over at Crusader Rabbit.