“Little Orphan Annie” the classic comic strip about a red-headed orphan who is adopted by super-rich “Daddy'” Warbucks, is set to return to the silver screen as a brand new movie. Meanwhile, jokes about “gingerscrimination” have been bandied about when it was revealed that first Willow Smith, and then Quvenzhane Wallis were the leading contenders to play the role of Annie. Both child actresses, by the way, are Black, and thus not “Persons of Pallor.”

Such casting could very well be an interesting take on “Little Orphan Annie,” regardless if either of the two child actresses wore wigs of red hair or not. One group that has been suspiciously indifferent to this possible casting is the group Racebending.com, who got their start as a protest group that threw a temper-tantrum about the movie “The Last Airbender” because child actors and actresses were being cast in the roles of fictional cartoon characters originally intended to be of another race (from the TV show “Avatar: The Last Airbender”). While the creator of the TV show thought of the characters as “Asian” and was certainly inspired by East Asian cultures, the movie was an adaptation, and changes happen all the time with adaptations. But was the casting of a “Person of Pallor” such an egregious departure from the character? Compare the cartoon character on the left with the child actor on the right in the picture below. To your humble author, they look similar enough; to the hyper-racial folk over at Racebending.com, it was an evil racial whitewashing. 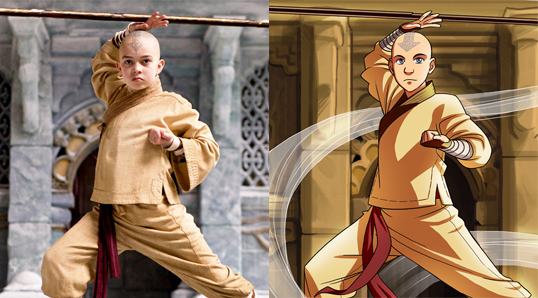 Isn’t it possible that an actor, who happens to be white, could play a character originally voiced by a white voice actor and created by two white guys? Isn’t a good actor supposed to be able to play other people that they are not like?

Racebending.com gives several examples, both past and present, of whites being cast as non-whites. While there certainly has been racism in the past, and to a far lesser degree in the present, it is rather difficult to ascribe racism as the motive in all of their proffered cases. Charlton Heston played a Mexican national in A Tough of Evil; there are many Mexican citizens of primary European decent. Boris Karloff played Fu Manchu in The Mask of Fu Manchu; perhaps the studio wanted to use their biggest horror/villain star to play a villain? Al Jolson, who was Jewish, played a Jew in The Jazz Singer (so this is hardly “racebending”). A modern example given is that of Mike Meyers playing an over-the-top character that he created in The Love Guru.

Some of the examples of “racebending” they give are just outright ridiculous. For example, they complain about the Royal Shakespeare Company putting on the Chinese play “The Orphan of Zhao.” The actors are mainly white. Of course, England is primarily populated by English people (who happen to be White, by the way), with an East Asian population consisting of less than 1% of the total population. Are actors who happen to be white so incapable of acting that they can’t do the play justice? Are they so unable to act anything other than “white” that it would be justified in effectively discriminating against them in order to cast people who ethnically fit? Who cares if Hank Azaria plays a Bengali or if Phil Lamarr plays a Japanese Samurai?

“Our organization’s primary concern is the impact of “racebending” on underrepresented communities. Casting established characters of color with white actors has a huge, harmful impact on underrepresented communities of color and their struggles for representation. On the other hand, casting Nick Fury, Cinderella or Velma with actors of color had no discernible impact on the overall opportunity for white children and consumers to be represented by and relate to the wide array of other Hollywood characters who are white, including other incarnations of Nick Fury, Cinderella, and Velma.”

Such a double standard is not surprising any more. But at least they come clean and admit that they don’t really care about characters of one race being played by a person of a different race; they care about movies having too many white people. It is just another example of how many on the left treat people differently because of their race

Undoubtedly, many of the people at Racebending.com, and their supporters, honestly just want Asians, and other non-Persons of Pallor to have the same opportunity to act as whites. Unfortunately, their underlying logic is faulty, and the credence thereof is marred by the double standards they use.

Considering that their main beef is with Hollywood, and considering that Hollywood if filled with leftists who happily spout racist comments, perhaps they have a point about a racist culture keeping them down? Though even then, it would be interesting to see what the demographic breakdown of the Screen Actor’s Guild is, to see if a “desperate impact” argument could even be made.

This entry was posted in Progressives and tagged Affirmative Action, Kyriarchy, Social Justice. Bookmark the permalink.