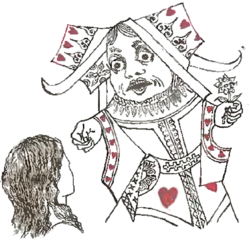 Sexual abuse proceedings against men in college had for some time now devolved into, at best Kangaroo Courts, and at worst unabashed Star Chambers. But now a court has dismissed the idea that colleges are biased against men… by declaring that they are equally biased against everyone!

“The University of Northern Colorado successfully argued that its Title IX judicial process did not discriminate against a student based on his sex.

“Instead, university attorneys argued, the process is biased against accused students in general.

“District Court Judge Michael Hegarty dismissed the lawsuit from a black student who had been suspended for two years after the university found him guilty of sexual assault.

“The university argued, in its dismissal motion, ‘if any bias was exhibited by UNC, or experienced by Plaintiff, it was bias against respondents to sexual misconduct claims,’ instead of ‘bias against males.’

“The court said that this may reflect a bad set-up by the university, but does not constitute discrimination.

“‘The use of interchangeable labels for the meeting/hearing may be a poor and confusing practice,’ the court said, ‘but it is not evidence of gender discrimination or anti-male bias without some evidence that such practices are not used for female students or are in some way inconsistent with other proceedings.’”

That males receive a “disproportionate impact” does not seem to “prove” discrimination like it would if the sexes were reversed, but that would be just regardless because these Star Chambers are acting towards an equity of oppression, and any differences in treatment are just means to that woke end.

One Response to Star Chamber Equity