After the Supreme Court played Humpty Dumpty with Marriage, Chief Justice Roberts pointed out how Same-Sex Marriage lays the justification for Plural Marriages:

“Although the majority randomly inserts the adjective ‘two’ in various places, it offers no reason at all why the two-person element of the core definition of marriage may be preserved while the man-woman element may not. Indeed, from the standpoint of history and tradition, a leap from opposite-sex marriage to same-sex marriage is much greater than one from a two-person union to plural unions, which have deep roots in some cultures around the world. If the majority is willing to take the big leap, it is hard to see how it can say no to the shorter one. It is striking how much of the majority’s reasoning would apply with equal force to the claim of a fundamental right to plural marriage.

“When asked about a plural marital union at oral argument, petitioners asserted that a State ‘doesn’t have such an institution.’ But that is exactly the point: the States at issue here do not have an institution of same-sex marriage, either.”

Now that a person’s sex is irrelevant, there’s no reason other than irrational animus to limit marriage to only two people.  Why?  Because every argument that has been made against Same-Sex Marriage, and dismissed, could be applied to plural marriages. 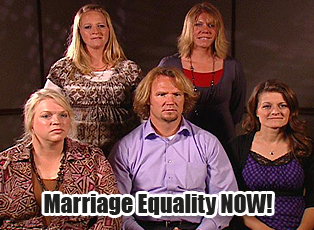 “The question presents itself: Where does the next advance come? The answer is going to make nearly everyone uncomfortable: Now that we’ve defined that love and devotion and family isn’t driven by gender alone, why should it be limited to just two individuals? The most natural advance next for marriage lies in legalized polygamy—yet many of the same people who pressed for marriage equality for gay couples oppose it.

“Polyamory is a fact. People are living in group relationships today. The question is not whether they will continue on in those relationships. The question is whether we will grant to them the same basic recognition we grant to other adults: that love makes marriage, and that the right to marry is exactly that, a right.”

The question of plural marriage is no longer just a hypothetical. A Montana family applied for a marriage license:

“Nathan Collier and his two wives, Vicki and Christine, said Tuesday that they are simply looking for equality.Nathan is legally married to Vicki, but also wants to legally wed Christine.

“On Tuesday, Nathan and Christine traveled to the Yellowstone County Courthouse to see if they would be awarded the right to marry under the Marriage Equality Act.

“The Colliers were initially denied the license, and the clerk later returned to tell the couple that they would have to check with the Montana Attorney General’s office.

Many are striking a blow against duo-normative oppression.  Perhaps the end of this anti-plural marriage irrational animus will end? sigh.