Can, and ought, Missouri Gov. Nixon be impeached for his support for the Ferguson mob? 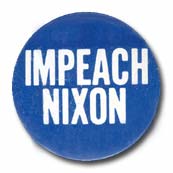 The Missouri Legislature has GOP super-majorities in both houses:

Nixon can be impeachment according to Missouri Constitution:

“Section 1. All elective executive officials of the state, and judges of the supreme court, courts of appeals and circuit courts shall be liable to impeachment for crimes, misconduct, habitual drunkenness, willful neglect of duty, corruption in office, incompetency, or any offense involving moral turpitude or oppression in office.

The Missouri Legislature could totally take him out. Bending over for the lynch mob would certainly be included in the crimes of “willful neglect of duty, … incompetency, or any offense involving moral turpitude or oppression in office.”

Certainly, siding with the mob against the standard rule of law, by calling by executive fiat the condemnation of certain individuals, is beyond the pale.

Gov. Nixon has engaged in “misconduct,” “willful neglect of duty,”  or “offense”… “involving moral turpitude,” perhaps?  Certainly more than the those below him.

One Response to Impeach Nixon!