Oppression of the Grammar NAZIs

Graduate students in the School of Education & Information Studies at UCLA staged a sit-in to protest a most vile form of evil oppression by White oppressors.  Just what was this vile evil being thrust upon poor downtrodden and oppressed students?  Correct Grammar.

“In a letter sent to colleagues in the department after the sit-in, [Professor Val] Rust said students in the demonstration described grammar and spelling corrections he made on their dissertation proposals as a form of “micro-aggression.”

“‘I have attempted to be rather thorough on the papers and am particularly concerned that they do a good job with their bibliographies and citations, and these students apparently don’t feel that is appropriate,’ Rust said in the letter.” 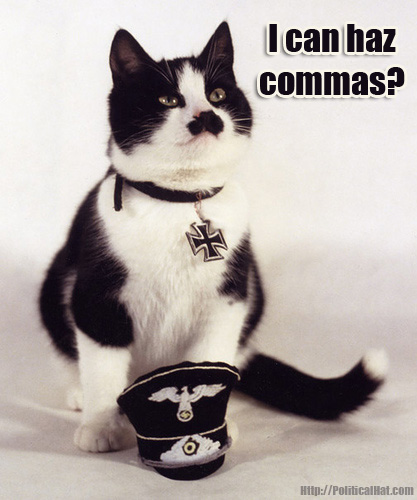 These grammatical and spelling corrections are considered to be “micro-aggressions,” which are defined as:

“It is not clear whether any workable definition of discriminatory conduct is capable of capturing every such microaggression.”

Therein lies the problem.  To be guilty of being an oppressor, you don’t have to intend to oppress, or even know that you are doing it.  With Critical Race Theory idjit declaring that “Whiteness” is inherently false and oppressive, just existing is enough for some people to oppress others via these “micro-agressions.”

The intent becomes irrelevant.  Even if something innocuous is said, it could still be considered a “micro-aggression” and H8 crime is someone else feels oppressed by it.  This becomes frighteningly problematic when one realizes that these students who protested are being taught that straight White “cis-gendered” X-tian males are necessarily oppressive bigots who oppress others to keep their own unearned privilege, thus their very existence is a “micro-aggression” and must be brought to “social justice.”

Or, perhaps, a comma is just a comma.