A.I. And The New Digital Feudalism

Progressives, including the increasingly powerful digital oligarchs, seem to want to create a new feudal society, abet one they delude themselves into thinking will be a shiny sci-fi utopia that is always 20 minutes into the future…

One growing lynchpin of this purported utopian future is the rise of A.I. and automation in manufacturing, which would lead to a “purple wage” scenario whereby most people get all the basics to live and love without having to work, only doing so if it their passion or whatnot, like an early episode of Star Trek: The Next Generation. Not even customer service or even coding will require actual human input soon enough.

“AI is also automating jobs in customer service, accounting, and a host of other professions. For instance, companies like Thankful, Yext, and Forethought use AI to automate customer support. This shift is often imperceptible to the customer, who doesn’t know if they’re speaking to a biological intelligence or a machine. The rise of AI-powered customer service has big implications for the workforce. It’s estimated that 85 percent of customer interactions are already handled without human interaction.

“According to the Bureau of Labor Statistics, there are nearly 3 million customer service representatives employed in the United States. Many of these jobs are at risk of being replaced by AI. When jobs like these are automated away, the question is: Where do the displaced workers go?

“The answer is not clear. It’s possible that many of these workers will be re-employed in other fields. But it’s also possible that they will become unemployed, and that the economy will struggle to absorb them. This is driving calls for a universal basic income, in which the government provides all citizens with a basic income to live on, to offset job losses due to automation.

“Just over a year ago, an OpenAI beta tester posited that AI may one day replace many coder jobs. At the time, OpenAI hadn’t yet released its code-generation engine, Codex, which now allows AI to autonomously write code in multiple languages. While the Codex of today is fairly primitive, one doesn’t need to be a futurist to see how this technology could be used to automate away many coder jobs in the future. As AI gets better at understanding code and writing it, it will soon come to match and ultimately exceed human skill levels.”

The flip side of this situation is that those who control the digital world and the A.I. manufacturing will become like Feudal Lords who run things and can revel in all the benefits of Nomenklatura. This will be less “ Star Trek: The Next Generation” and more “Paranoia” the role playing game with Ultraviolet programmers and Infrared scrubs who are interchangeable. 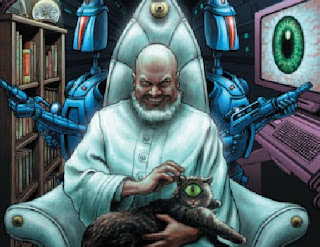 Indeed, the elite would have every reason to keep their power by deemphasizing learning learning bona fide academic fields for the new peasants, who are distracted with wokeness, social justice, and kept in a perpetual state of juvenile thinking, in effect becoming domesticated livestock for the elite to play around with like a child with a puppy. Modern college is already on its way to being transformed into a paragon of this new pseudo-education and faux-intellectualism. If the elites need more people to keep the scheme going, they can always pluck the select few—who are properly indoctrinated into the proper way of thinking of course—to rise to their lofty ranks.

One Response to A.I. And The New Digital Feudalism