The British NHS Is A Cult 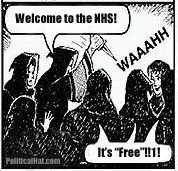 A curious thing to Americans that there is nary a dissenting voice about the British National Health Service, even from the most conservative corners, despite the NHS’s rather horrific record. The only explanation is that the NHS is a cult with devotional followers, which the following NHS homily repleate with being declared “our saviour” and “each one one of you we bless”. It even comes complete with festive holiday music despite being released in April, shows.

"If we abolish Christianity everyone will become rational freethinkers"

If there was any other doubt that the NHS is a cult, they even perform child sacrifices!

Note, also, the similarity with this Scientology video.

At least the Scientologists weren’t as pathetically cheesy as the NHS.

One Response to The British NHS Is A Cult