One of the common responses from some quarters to the #BlackLivesMatter/Antifa rioting/revolutionaries is that they are all “soy boys” who will fold like an accordion once they face real opposition (presumably from the manly-men who so opine).

This of course, ignores myriad facts to the contrary. 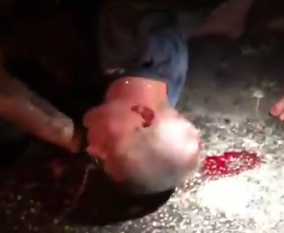 Pictured: A fact to the contrary.

The #BlackLivesMatter/Antifa rioters/revolutionaries have demonstrated an ability to organize, a source of outside material support, an ability to fund, and that they have the tacit approval of elected officials.

But more than that, they’ve demonstrated a willingness to engage in hyperviolence, mayham, and even outright murder. It doesn’t matter how good of a shot you are with your AR-15 build or how much tactical awareness you have when you are up against people who engage in organized swarming tactics who will hunt you down like they were feral dogs. Calling them “soy boys” will not stop them from ambushing you or your family, or just destroy your life and the life of your family if you are lucky. Most notably, it will not protect your from the government that will come down upon you like a ton of bricks while giving the rioters/revolutionaries a slap on the wrist (if they are unlucky). Don’t trust on the jury siding with you and letting you off based on Jury Nullification or mass popular support—after all, you’d be judged by the type of people who overwhelmingly voted in the elected officials who have been giving tacit support to the Black Bloc terror.

Do not under estimate the danger, for the threat is real.

This entry was posted in Progressives and tagged DOOM, Leviathan, Occupy, Social Justice. Bookmark the permalink.