Woke academics seems to dictate that 2+2=5 is a valid statement, and to say so seems increasingly in fashion. It is not only the perfect example Leftist thought that has its roots reaching all the way back to Kant and to Hegel, the later being the origin of Karl Marx’s pseudo-intellectual nonsense. But by putting it in mathematical terms, it also allows one clearly understand the dishonesty or delusion of the anti-objectivity cult of deconstructing Woke. 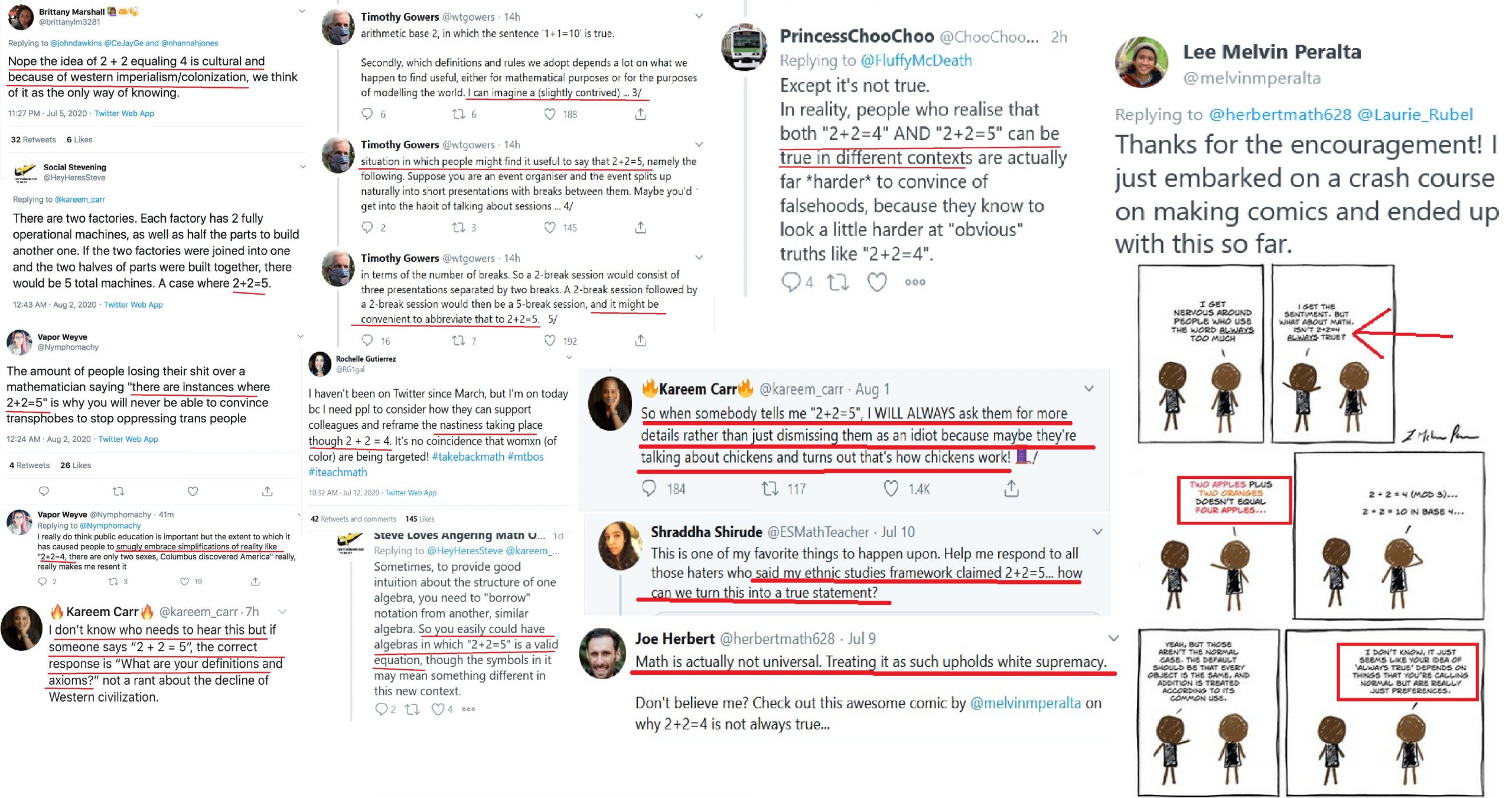 Pretty much everything said in those “proofs” that “2+2=5” confuses with terms used to describe something with that something itself. Changing the definition of “2”, “5”, “4” or “+” does not, and can not, change the veracity of the objective truth of what “2+2=4” represented.   The definition of a word derives from what it is defining, and changing the definition can not, and will not, change that which was defined into what it is now defined as. To think otherwise is to engage in magical thinking that rejects objectivity and replaces it by an ever changing reality where a hegemonic consensus creates reality.

James Lindsay, at the New Discourses, wades through the linguistic dishonesty.

“If these other mathematical groups (or what-have-you) exist, then 2+2 doesn’t have to be 4, and we do have other mathematical universes (if we will) in which the Crits are right. No. Again, the symbols ‘2,’ ‘+,’ and ‘4’ mean something different in those contexts, and so this is no more profound than misusing a word that has two meanings in two different contexts except that the activists are doing it on purpose, counting on people not to understand it, so they can “expand potentialities of being” and politics, as Foucault would have it. The kindest thing that can be said of this game is that they’re confusing themselves (and others) specifically so they can win an argument on the internet.

“This last one one gives away the other half of the activist game (the word game part) so explicitly that it’s literally perfect. It’s a direct explanation that if you just change the meanings of the relevant symbols, you can use them to write something down with a different meaning, i.e., codes exist, and they seem to believe that everything is just a code, either for the right politics or the wrong. And this is what they do with everything else in our language too: ‘racism,’ ‘anti-racism,’ ‘black lives matter,’ ‘rape culture,’ ‘misogyny,’ ‘critical,’ ‘hate speech,’ ‘diversity,’ ‘inclusion,’ ‘fascism,’ and ‘anti-fascism,’ being examples that might stand out particularly (though my favorites are ‘authenticity’ and ‘engagement’). All it says is this utterly pointless triviality: If you change that which a symbol or sound signifies, it means something different. What a shock, then, how often these activists accuse everyone around them of talking in ‘coded language,’ huh?”

The fact that they are using the same word for two different meanings to not only push their meaning, but redefine reality by making those things defined via their new meaning transform into the things under the older meanings meanings. For example, “woman” which meant a biological female human” now means “person with a female gender identity”, and that by calling a man who calls himself a woman said “man” will acquire all the characteristics of “woman” and become a woman.

This is also how the differing definitions can be used as a Motte & Bailey attack as with the term “racism” via conflation, whereby people will be against “racism” because they assume that it means the normal definition of believing one race is better than another, but end up supporting the “academic” definition of “power plus privilege” that applies to all White people (and only White people) thus mandating that to avoid supporting “racism” one must be “anti-racism” and thus “anti-White”.

“Objectivity, in the relevant sense, means corresponding faithfully to reality, and thus mathematical statements can be considered objectively true to the degree that they faithfully represent reality. The basis of the postmodern question about objectivity is, is it possible to determine faithful correspondence to reality given that we’re imperfect instruments who necessarily are caught up in our own subjective experience? The postmodern reply to this question is an emphatic ‘no,’ although the emphasis of that denial is, our own political biases make it impossible to trust any claim on objectivity, so it is those political biases that are of interest. That is, postmodernism is, in some sense, the complete politicization of everything knowable, including the claims to knowledge themselves and the epistemologies used to make those claims. The fact that they can send messages to this effect over the internet, however, is an effective, if not philosophically complete, practical refutation of their philosophy.”

They are obsessed with power, and meaning becomes the ultimate power, as Humpty Dumpty surmised.   Power over meaning is a tool of defining meaning by power; or, in other words, the tool to define things is power, which gives the definer power over meaning, and since they belief the power to define can change reality, this power over words to them become the power over reality itself.

However reality does not work like this. Wishing it to be so does not make it so. Sooner or later there will be a mathematical equivalent of 正名 (Rectification of Names).