The Cowardly Propaganda Of Courageous Conversation

For far too long far too many have rejected the notion that “Critical Race Theory” is a danger—dismissing it as a fringe or wacky idea that most people wouldn’t put up with—but even when the danger is recognized the sheer depth of the institutional and even systemic infiltration can still allow one to think that they can shield their children from it or that at the very least their being good parents is all that is needed to raise their children right when they don’t even grok the nature of the propaganda and the form of the indoctrination.

One such use of propaganda to infuse woke indoctrination can be seen by a company called “Courageous Conversation”, which is neither courageous nor a conversation.   Your humble author have pointed them out before. In reality, to presents their worldview, beliefs, and definitions as unquestionable truths against which any dissenter is labeled “racist”. This “conversation” is framed so as to trick people into thinking that they’ve reasoned out for themselves that “Whiteness” is wrong and “anti-racism” is the only cure for this pandemic of pallidness. 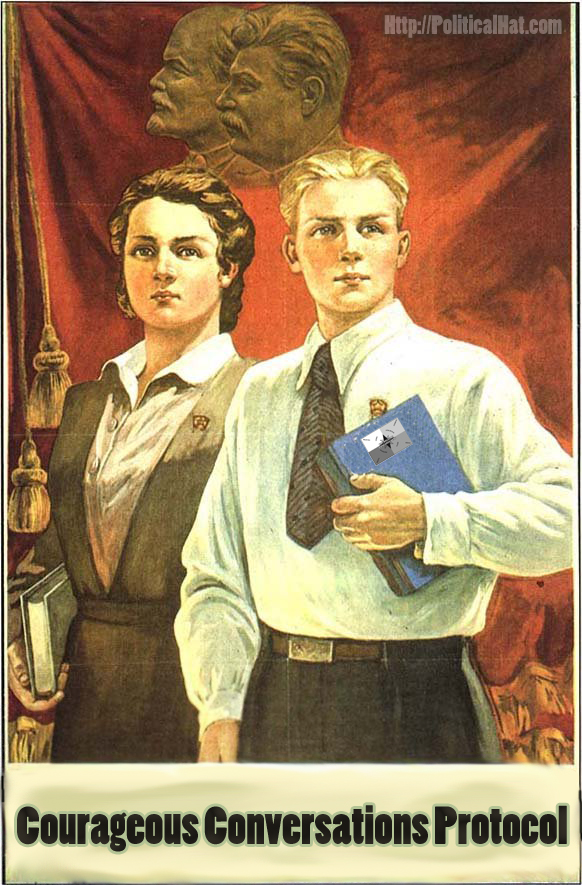 A concerned father—who’s child, as well as students throughout the Montgomery County Maryland Schools, was being taught this drivel—has helped shed light on this.   Unsurprisingly, the program is intended to make children—especially White children—“uncomfortable.” It will “examine how conversations about gender and race can challenge the dominance of Whiteness”. That’s not a conversation, it is a struggle session that presumed guilt and only demonstrate what that guilt is; it’s like they are running a Cardassian court!

But this is not just an attack on people because of their race, but an attack on America itself by associating the broader American culture with “Whiteness” (which has become increasingly more common and mainstream) which they’ve axiomatically declared evil, thus they simply see themselves as pointing out how America is systemically evil and that the system is unreformable, with “solutions” coming from the outside, which from their support for #BlackLivesMatter is a revolutionary “solution”.

The “course packet” can be found here or read below:

The school’s defense was deflective and dishonest, with the principal saying it was “just a conversation”, that it “focus[ed] kids on bias”, and “create[d] a safe space”. A clear narrative was disguised as a “conversation”. This man’s request to observe this “conversation” was denied. The cockroaches can’t let light be shined on them, after all.

The protocol overview for “Courageous Conversation” can be read below.

The full toolkit for “Courageous Conversations” can be read below.

Toolkit for Courageous Conv… by ThePoliticalHat

Don’t think that this isn’t being taught to your kids, even if they are in a charter or private school. Confront and question. Never back down and never ever believe the schools without proof. If they don’t want to tell you what they are teaching your children, then they are hiding something.

2 Responses to The Cowardly Propaganda Of Courageous Conversation