Canadian Physicians Empowered To Kill At Will

We were told that euthanasia would only be by the consent of a patient who was not only terminally ill with but months to live but also was in their right mind without duress.

Then euthanasia was extended to children, the mentally ill, and others unable to consent, which foregoed the requirement of not only desire, but outright consent, for once established as an acceptable medical procedure, doctors were free to use this “treatment”. 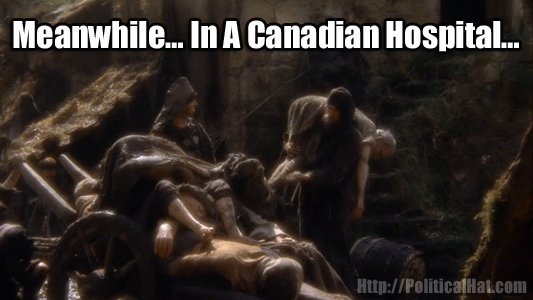 Now, in Canada, a doctor can not only deny life-saving treatment for a person in their right mind who wants it, but actually have that patient, against the patient’s will and with their full mental faculties, outright executed by lethal injection:

“Tonight I am preparing to celebrate a funeral for someone (let’s call him ‘H’ to protect his privacy) who, while suffering from cancer, was admitted to hospital with an unrelated problem, a bladder infection. H’s family had him admitted to the hospital earlier in the week under the assumption that the doctors there would treat the infection and then he would be able to return home. To their shock and horror, they discovered that the attending physician had indeed made the decision NOT to treat the infection. When they demanded that he change his course of (in)action, he refused, stating that it would be better if H died of this infection now rather than let cancer take its course and kill him later. Despite their demands and pleadings, the doctor would not budge from his decision. In fact he deliberately hastened H’s end by ordering large amounts of morphine ‘to control pain’ which resulted in his losing consciousness as his lungs filled up with fluid. In less than 24 hours, H was dead.

“Let me tell you a bit about H. He was 63 years old. He leaves behind a wife and two daughters who are both currently working in universities toward their undergraduate degrees. We are not talking here about someone who was advanced in years and rapidly failing due to the exigencies of old age. We are talking about a man who was undergoing chemotherapy and radiation treatments. We are talking about a man who still held onto hope that perhaps he might defy the odds long enough to see his daughters graduate. Evidently and tragically, in the eyes of the physician tasked with providing the care needed to beat back the infection, that hope was not worth pursuing.

“Again, let me make this point abundantly clear: It was the express desire of both the patient and his spouse that the doctor treat the infection. This wish was ignored.”

Considering that in Europe, people are euthanizes even though they are perfectly healthy, it is clear that doctors now have the license to kill anyone and everyone they “treat”.

This entry was posted in Healthcare and tagged DOOM, Leviathan, RIP. Bookmark the permalink.

6 Responses to Canadian Physicians Empowered To Kill At Will