While The Worst are Full of Passionate Intensity

Rousseau’s Volonté Générale presumes that there is a general and common will amongst the collective of a nation. While the concept of a “General Will” is a fanciful notion of a false god, and readily dismissed previously, it nonetheless can be pointed out that it presumes some unifying element that defines a people as a people.

We have reached the point where such a façade can not be maintained anymore. In its broadest sense, America is now divided between those who wish to fundamenally transform it, and those proverbially stand athwart history and yell “STOP”.

America is turning and turning in a widening gyre—the center can not hold. Any chance at empathy or coming together over common ground can not happen when people become polarized into a tribal identity of us vs. them. Even the barest of civility is gone.

“Rep. Tom MacArthur, a New Jersey Republican, tried to explain his thinking on the GOP health care bill to angry constituents. MacArthur, who authored the amendment allowing states to apply for a waiver to opt out of some health insurance requirement, knows something about preexisting conditions. His daughter died of health complications when she was 11. The cost of her care was more than $1 million. MacArthur was in the room when she was taken off life support.”

While some on the broader “Right” have opined about “the burning times” with a haughty assumption that they’d be able to brush aside a scant few “pajama boys” once “establishment” enablers, such talk has demonstratedly been so far almost all talk. However, with Hillary Clinton’s defeat in November 2016, the paranoid and violent delusions of the acolytes of the transformative (and often cult-like) Left, have been unchained.

Unlike with the broader Right, the broader Left has been quickly allowing itself to be whipped up into a frenzy of far beyond mere “burning times” opining, and onto to actual violence:

“The reason for this is straightforward enough: although progressives pride themselves on their putative tolerance and diversity, the imperatives of leftist politics are fundamentally illiberal. Justice imposed through power is the philosophical foundation of the political left, and when earnest progressives become convinced the only avenue to power is violence, their tolerance quickly falls by the wayside. Consider a few recent events, none of which involved college protesters but all of which were marked by threats of violence.”

Death threats, both veiled and not-so-veiled have been made. This is not merely isolated incidents of hotheadedness. Things have gone beyond words to include stalking and vehicular assault.

This is but the beginning of the actual violence and physical intimidation. Actual physical violence against members of Congress have begun. For example, as a recent townhall meeting, North Dakota Congressman Rep. Kevin Cramer was physically assaulted.

If this is how the rapidly rabid Left acts when it is out of power, how will they act when they gain power again… and this time aim to never lose it ever again? 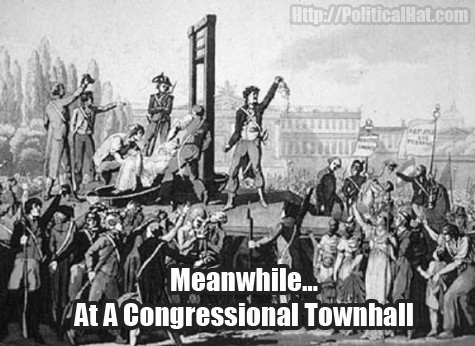 Circling back to Rousseau and the demonic child he’s responsible for, namely the French Revolution, the parallels between what America now faces and Revolutionary France have been well noted:

“In describing the condition of L’Ancien Régime in France, de Tocqueville points out [in L’Ancien Régime et la Révolution] that the centralization of the state associated with the French Revolution was actually extant in L’Ancien Régime. It was this centralization, and the atrophy of the local institutions, that allowed the Jacobins free reign to spread their insanity and terror. But is was a privileged elite, that could extract income and exercise special benefits that the common man could not, who became the target. In L’Ancien Régime is was the nobles who exercised special privileges and income without doing anything to earn it; in modern day America, it might turn out to be retired bureaucrats such as Alameda County Administrator Susan Muranishi who will receive $423,664 a year for life, who may play an analogous (abet non-violent) roll.

“Today we see a growing concentration of power within the government, primarily at the higher levels (Federal and state levels primarily), or by unelected bureaucrats. What this has resulted in could be adequately described by the characterization that de Tocqueville gave L’Ancien Régime in France. He noted that ‘[f]or obvious reasons a system of relief operating from such a distance was bound to be capricious, sometimes misdirected, and always quite inadequate.’ The sentiments of small business owners, property owners, or anyone touching upon things regulated by the government was echoed by the 18th century French: ‘The protest of a town thus treated figures in the records. “this measure has taken all of us, from the highest to the lowest, by surprise; we had absolutely no warning it was coming.”‘”

As any of the national election maps over the recent election cycles have indicated, we are quickly being divided into an urban and coastal Leftist archipelago surrounded by unprogressive “flyover country”. Taking the parallel of the French Revolution, and especially the Reign of Terror, further, we see the perfect example of what happens to those who dare stand up against the enlightened agents of revolution and change:

“The truth is, the French Revolution was a cosmopolitan affair, led by men who were educated and well off, relative to the peasantry. The Jacobin Club was not for hod carriers and sewer workers. It was lawyers and academics. These were the men who had internalized the ideas of the Enlightenment and began to think about the political framework that should spring from those ideas. Of course, it was centered in Paris, which was where the cognitive elites were centered. These were urban revolutionaries.

“That does not mean the countryside had no role in things. It’s just that the waves of change radiated out from Paris.The key insight of the Jacobins was to send representatives out into the smaller towns and cities to organize radicals and incite rebellion. It was a stroke of genius that has been copied by radicals and revolutionaries ever since. Many rural peasants welcomed the revolution as it meant some degree of freedom and the redistribution of lands seized from the Church and aristocracy.

“As is always the case with radicalism, they went too far and were soon alienating the people they claimed to champion. The Civil Constitution of the Clergy was passed on July 12, 1790, requiring all clerics to swear allegiance to the French government. The radicals could get away with seizing Church lands, but when they seized the priesthood, the people in the countryside began to resist. The Church was the center of rural life and the foundation of French rural traditional. The radicals were now making war on this.

“The revolt in the Vendée region, on the west coast of France, began with the March 1793 conscription requiring Vendeans to fill their quota of 300,000 men for the army. The enraged populace took up arms and quickly formed a Catholic Army. What started as a demand for reopening the churches and getting their priests back, turned into a Royalist counter rebellion against the Republic. Initially, the Republicans were caught off-guard and the rebels enjoyed some success, even though their army was ill-equipped.

“The Republic got its bearings and sent a 45,000 man army to suppress the rebellion and by the fall of that year the rebel army was defeated. The Committee for Public Safety decided that beating the army was not enough and opted for pacification. Whether or not the word ‘genocide’ is appropriate is debatable. Some estimates put the death toll at 400,000 for a population of 800,000. Then there was the ‘scorched earth’ policy of razing the homes of anyone suspected of being a rebel, which was anyone who owned a home.”

One Response to While The Worst are Full of Passionate Intensity