Dutch politician Geert Wilders was convicted of daring to question the number of Moroccan colonists being imported by the Dutch government into the Netherlands.

“Dutch member of Parliament Geert Wilders was convicted of ‘hate speech’ in court this week. His crime? Addressing a rally of his supporters earlier in the year where people were shouting ‘fewer’ when speaking of how many Moroccan immigrants they wanted in the country.” 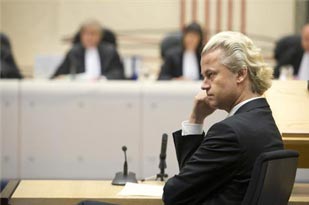 “Dutch anti-Islam politician Geert Wilders said his conviction on Friday of insulting a group and inciting discrimination was ‘insanity’ and said the three judges who handed down the ruling were “haters” of his far-right Freedom Party (PVV).

“‘Three PVV-hating judges declare Moroccans a race and convict me and half of the Netherlands. Insane,’ he wrote in a tweet shortly after the verdict.”

Like all socialist utopias, dissent can not be allowed to interfere with the delusions of the powerful…

This entry was posted in Progressives and tagged DOOM, Europe, Social Justice. Bookmark the permalink.

One Response to Geert Wilders Convicted of Expressing Thoughtcrime