The Alt-Right Is NOT Conservative

Trump’s campaign has been cat-nip to the Alt-Right due to support for building a border wall and putting the clamp on Muslim immigration.  It must be made clear, that there are indeed non-White Trump supporters who care not for the Alt-Right idiocy.

But who are the “Alt-Right”?  Sargon of Akkad presents a fair assessment of who the Alt-Right are.

Alt-right aren’t conservatives. They are a mirror reflection of the Left.  They are racial and ethnic collectivists who put the collective above the individual.  Both the Progressives and the Alt-right are racist… they just disagree as to who the enemy is.  The Left divided people by race, amongst other factors, and set-up an “us vs. them” dichotomy.  The Alt-Right in America, old school neo-NAZIs aside, are a creation, then, of the Left.  The Alt-Right agree with the Left that there is an “us vs. them” dichotomy, and even of what that dichotomy is, but differ on who is “us” and who is “them”.

Though not all people who associate with the Alt-Right are motivated by feelings of actual White Supremacy or hatred of Jews, the hatred from the Left with their conspiracies about “Kyriarchy” push people towards the Alt-Right as a welcoming counter to the Progressives.

It is a  false assumption that the GOP is a manichean choice between establishment squishes and Alt-Righters, for neither side is conservative.

This “Right-Left” dichotomy the Alt-Right invokes is a distinctly un-American one.  American Conservatism is not on the European Right/Left spectrum, but orthogonal thereto.  It is a civic inheritance, not an inheritance of blood:

The American weal is a civic inheritance that transcends race. To deny that is to deny America.  It is not about race, it is about assimilation. Droves of socialist 1st World Europeans coming to America would not be better just because those socialists were mostly White.  It wasn’t the race of the immigrants who are destroying America, it was the war against assimilation wages by the Progressives via the cult of “multiculturalism”.

Would importing socialist Europeans would be better? Better for the populist/nationalist Leftists (i.e. the Alt-Right) of course.  This would be but the mirror image of the Progressives importing non-Whites that they try to keep from assimilation by bashing America as racist and encouraging Balkanism.  Both are anti-thetical to America.  America, then, is not for or against immigrants because of their race, but based on whether said immigrants want to become America and embrace it… or merely to supplant it.

Real conservatives will call out those who play ethno-national and racially populist nonsense, and condemn them. 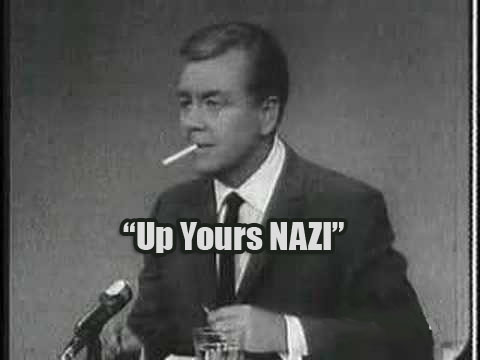 There is no better example of this than the late Joe Pyne, who was one of the earliest conservative radio and TV personalities, as can be seen with his clear disdain of “American NAZI” Lincoln Rockwell:

Though some deny it, the most fervent Alt-Righters always end up taking ethno-nationalist and racial populist stances “(and whine about the Jooos”).  They will readily call people “neocons” (i.e. eeevil Jooos) and “cucks” or “cuckservatives” (i.e. White race traitors), while pleading that they don’t “hate” non-Whites… they just don’t want them around.  If being an American who believes in this country’s civic heritage make me a “race traitor”, than I am one proudly.

This entry was posted in Elections, Uncategorized and tagged GOP, Patriotism. Bookmark the permalink.

7 Responses to The Alt-Right Is NOT Conservative