One of the main arguments against Hobby Lobby in the contraception case was that the mandate “was the law” and the protections of the 1st Amendment could be restricted because it didn’t stop anyone from worshiping in private.  In other words, your public rights protected by the 1st Amendment do not exist, particularly if commerce is involved.

This, of course, is one of the root beliefs of the Left:  Everyone submits themselves totally to the state, and are rewarded by the Volonté Générale (General Will).  Rights are determined, not directly by a democratic vote, but are divined by “democracy”… and to go against the “General Will” is to go against the false god of the state/society.

Rights, then, are to balanced according to the will of society as determined by haruspices of the state.  Thus, rights might be considered “innate,” but it is the state that divines the “innateness” of the state.  Thus, what the state giveth, the state can always taketh away.  This ought to be fair warning to the socialists and other fellow-goers who cheer-lead the trampling of the 1st Amendment (which was written to protect people from them): 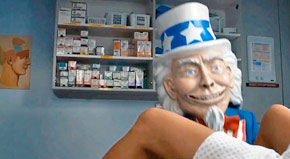 This is no empty warning, this has already happened in Romania under Ceausescu, where abortion was banned and fertility measures pushed in a typically Communist way.

“[T]he motivation for restricting family planning wasn’t sanctity of life, social conservatives’ rationale against some contraception and abortion. Romania under Ceausescu cared little for the lives created. (Research on child neglect is based on Romanian orphanages because it was prevalent.) The motivation for forced pregnancy was producing labor to sustain the Romanian welfare state. This is a Progressive temptation.”

This, ironically is what the Left accuses non-Leftists of doing in opposing the state forcing a private company and thus its owners to violate its conscious.

A “right” that can be “balanced,” “negated,” or otherwise infringed is not a “right” in the same fundamental and inalienable way that the Bill of Rights explicitly states.

One’s “right” to force others to subsidize their sex life in the name of “privacy” does not make sense to rational beings.  It is a contradiction, but can be made sense if one realizes that it is but an excuse for the state to implement its policy in the name of its god the “will of the people.”

That a laughable fig leaf is offered by allowing dissenters to pay a jizyah or to practice alone at home in their closet, does not detract from this.

Ultimately, all rights, not just those protected by the 1st Amendment, but the “right” to contraceptives are given out by the state at the whim of the state.

Power, then, comes from being able to decide what is or is not a “right,” and how “rights” ought to be “balanced.”  For the Left it is easy.  They see the government as but a neutral tool of the “will of the people.”  Thus, anything the government does must be just and never a violation of any rights since “the people” would never harm themselves and the “people’s” rights are what the government/people decide.  This is never a violation of individual rights since all rights are collective and an individual only has the rights that the collective decides it has.

But what if the government takes a stance on “rights” that the Left does not fancy?  Easily solved: If it is what they want, then is an authentic expression of the will of the people; if it isn’t, then the decision was caused by a conspiracy of “Reich-wing” Tea Party terrorists.

Ultimately, in the Leftist worldview you have no real rights: You only have the license to do what the state wants to allow you to do.

To the Leftist out there, a question:  Are you really so sure that your cherished “right” will always be the right that the state recognizes.

This entry was posted in Healthcare, Progressives and tagged Communism, Democrats, Leviathan, Obamacare. Bookmark the permalink.