All Your Speech Are Belong To Us

” Congress shall make no law… abridging the freedom of speech, or of the press”

This part of the 1st Amendment seems rather straightforward.  The government can’t interfere with a persons right to speak freely, or communicate his or her thoughts.  While there might be consequences such as with slander or incitement to violence, those are consequences, not prior restraint.

Unfortunately, nearly half of the Supreme Court considers the 1st Amendment to be a collective right to be used when the state deems that it is in its best interest.  In other words, the idea that the 1st Amendment protects people from the government is being tossed out in favor of the mistaken belief that it facilitates the government at its whim.

“Consider at least one reason why the First Amendment protects political speech. Speech does not exist in a vacuum. Rather, political communication seeks to secure government action. A politically oriented ‘marketplace of ideas’ seeks to form a public opinion that can and will influence elected representatives.”

In effect, Breyer believes that the 1st Amendment is meant to further democracy, and that when free speech results in one person having a bigger soap box than another, than censoring the person with the larger soap box to the point where both voices are heard equally is absolutely Constitutional.  In effect, this means that you are only allowed to say what you want if it doesn’t conflict with the government’s ideas of what is best.  As David Bernstein notes:

“Justice Breyer’s dissent today shows the way, as he revives the old Progressive conception of freedom of speech as serving instrumental purposes (which he calls “First Amendment interests”), rather than protecting individual rights or reining in potential government abuses.  And once we identify those ‘First Amendment interests,’ we must limit freedom of speech to ensure that they are advanced.” 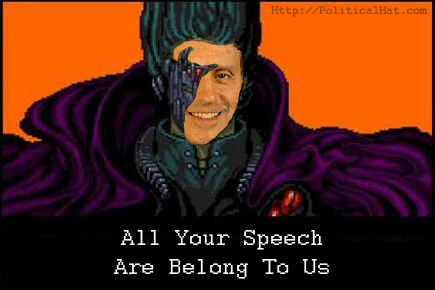 The veritable Ace of Ace of Spade HQ states is bluntly:

“You’ll see here that Breyer does not accept that free expression is a natural right. Instead, he recognizes it as a right (or perhaps a ‘right’) only insomuch as it furthers the end of what he would characterize as a properly-functioning government.”

This is in stark contrast to the Bill of Rights.  Therein it is declared that such rights existed independent and prior to the government.  They were individual rights and the Bill of Rights were declarative of that and restrictive upon the government.  In the hands of the Left, this individual right becomes a privilege that the state promises to hand-out to the favored:

“Unlike the Declaration of Independence’s bold proclamation that our rights are God-given, the statist view is that individual rights only exist to the extent that they serve the state. You can have a weapon IF you are in a state organized militia. You have freedom of the press IF you are employed by a newspaper.”

An advocacy group that is opposed to abortions, the Susan B. Anthony List, made an arrangement to put up a billboard in Driehaus’s district that would proclaim: “Shame on Steve Driehaus!  Driehaus voted FOR taxpayer-funded abortion.”  It also aired radio broadcasts with the same message.  The billboard never went up, because the company owning the space backed down when a lawyer for the congressman threatened to sue, claiming the message misrepresented his vote.

“Driehaus soon pursued a complaint with the Ohio Elections Commission, which has the power to recommend prosecution for violations of a state truth-in-politics law.  That law has two key provisions: it prohibits anyone from trying to influence voters by intentionally making a false statement about a candidate’s voting record, and it prohibits the distribution of any false statement about a candidate if the source knew it was false or didn’t care whether it was true or false.

“The state commission, in a preliminary vote, sided with Driehaus, but before any prosecution by state officials went forward, Driehaus was defeated for reelection, and his complaint was dismissed by the commission at his request.”

As, yet again, Ace of the Ace of Spades HQ points out:

“And, as events would have it, it turned out the SBA was right.

“But the fact that the SBA was right shouldn’t control the issue here. Rather, it should illustrate how dangerous it is to have agents of the government deciding what is True and what is False on behalf of citizens, with prosecutions and other legal consequences flowing from their decisions.”

That is the ultimate danger, of course.  The government can not be trusted to declare what is absolutely right or wrong for such broad-reaching “truths.”

It is ironic that speaking freely on political matters without restraint is so dangerous, while other actions are considered so protected as to be sacrosanct:

But this is where the Collectivists chime in that the “government” is us.  And “we” would never oppress ourselves.  Since it is a “collective right” than “we” can not be censored because there is not force outside the state, leaving only the “collective” to decide what may or may not be said!  This is the philosophy of the Progressive Left, that “because the government is us, and we’re doing things right.”  As Ann Alhouse noted:

The government is not “us.”  The government has no rights that are not assigned to it by the people themselves… not a collectivist vision of “the people” but of the individuals that make up society, who express thier inalienable individual rights.

This entry was posted in Progressives, Uncategorized and tagged Leviathan, Patriotism. Bookmark the permalink.