Posted on December 4, 2013 by The Political Hat

The public schools are becoming increasingly more politicized.  They are used to teach obedience to the collective, the evisceration of the Bill of Rights, the fight for “social justice,” and even how to inform on their parents political views to the state.

Yet another example of the state “nudging” vulnerable kids to think correctly and help transform society has been uncovered.  The assignment presents various either/or political questions and labels them “Democrat” or “Republican.”  The problem lies in how those differences are expressed. 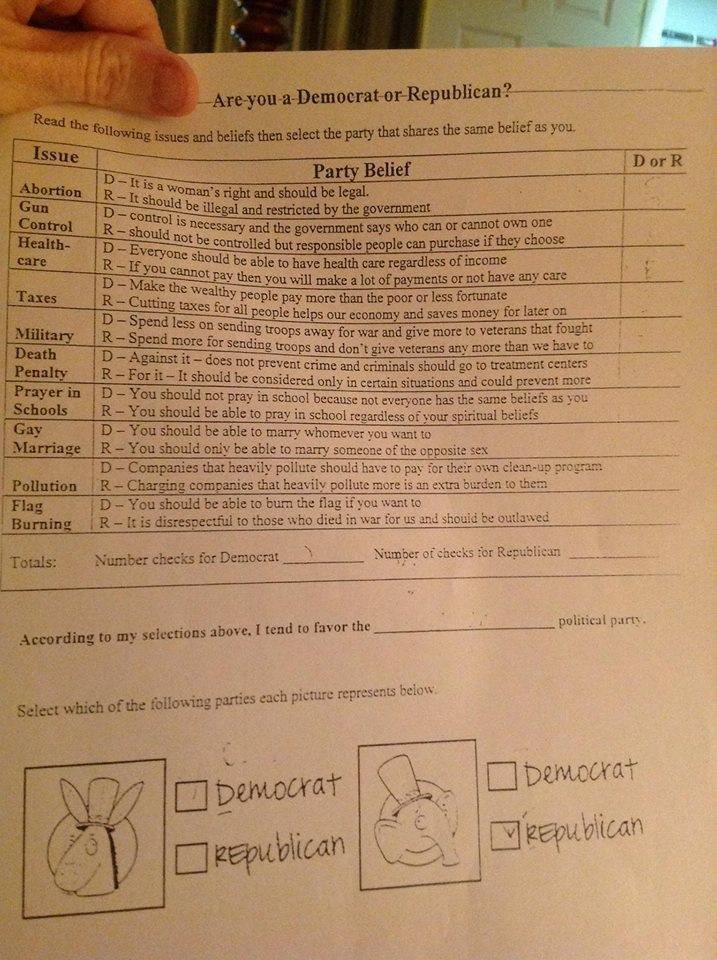 For example, in many of the questions, it becomes a choice of “do what you want = Democrat” vs. “you will be told what you can or can not do = Republican” such as is seen by the questions involving abortion, gay marriage, and flag burning.

The “Democrat” position on “Healthcare” is everyone gets free stuff, while the “Republican” position is that if you are poor you will be denied care.  Un-coincidentally, the following question states that the Democrat position on “Taxes” is “[m]ake the wealthy people pay more than the poor or less fortunate.”

The entire sheet paints Republicans as those who want to control your life and then deny you the necessities of life.  The question on the “Military” makes this dichotomy clear by declaring that Republicans believe that we should “[s]pend more for sending troops and don’t give veterans any more than we have to,” while the Democrat position is given as the opposite.

The framing of the political parties as Democrats being for the downtrodden and for freedom, while Republicans are for controlling people and protecting evil businesses as the people’s expense is clearly demonstrated by the “Pollution” question that the Democrats want to punish evil polluters, while the Republicans will protect the polluters from having to pay for clean-up.

The frightening thing is that it is likely that most of the indoctrination is more subtle, and sneaks beneath the radar.  It is ever so more important to view what comes out of our public schools with a critical eye.